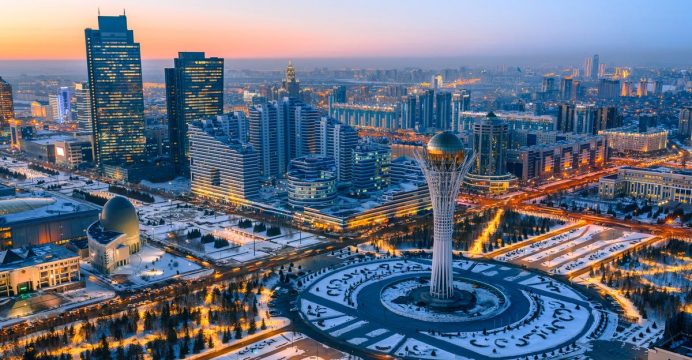 Kazakhstan: The keyword is diversification

Located in Central Asia with a geography extending from the Caspian Sea in the west to the Altai Mountains at its eastern border with China and Russia. Its largest metropolis, Almaty, is a long-standing trading hub. But Astana is the official capital city, which came into global prominence recently for hosting peace talks between the Syrian regime, the opposition and regional players Turkey, Iran, and Russia. With a population 18.4 million according to World Bank, Kazakhstan is not densely populated.

OIL IS THE BACKBONE OF THE ECONOMY

The Kazakhstan economy relies heavily on the vast hydrocarbon and mineral reserves, especially in the Caspian Basin. It is a major producer of uranium and has a thriving agricultural sector. The country is investing heavily in expanding its oil and gas resources. Tengiz oil and gas field expansion project has a budget of US $37 billion allocated. After completion of the project, production at the Tengiz field will increase by about 12 million tons, reaching 39-40 million MT per year.

Also, recently the project of expansion of the Karachaganak field with a budget of at least $5 billion has been launched.

Kazakhstan’s strong economic growth is based on oil

OPEC sources confirmed that Kazakhstan’s annual output” will reach 1.82 million barrels per day, during 2018 and 1.87 Million barrels per day during 2019. Kazakhstan plans to join the Baku-Tbilisi-Ceyhan (BTC) oil pipeline from 2019, Minister of energy Kanat Bozumbayev said at a meeting with his Azerbaijani counterpart in Astana last month, Kazakh media reported. He also said “crude and condensate production in Kazakhstan in January-October 2018 amounted to 74.5 million tons”. Compared to the same period in 2017, this represents 4.8% growth.

The increase in production is mainly due to large oil fields – Kashagan, Tengiz, and Karachaganak.

Kazakhstan is an emerging nation with most of the population classified as lower–middle- income country. This is changing. It is now considered as an upper-income country. The per capita has risen six-fold in the last 15 years and poverty has fallen sharply.

The currency is the Kazakhstan tenge which is tied to the Russian Rouble and the exchange rate is 1 US dollar = 371.99 KZT. The fortunes of the tenge depend on the rouble. On September 2nd the KZT fell to a 31 month low reaching KTZ 380.93

The challenges facing Kazakhstan included reduction of poverty and the slow-down in the economy during the 2014-2015 period. Rising oil prices 2017 helped the economic recovery. Like other oil producers in the Middle East, Kazakhstan needs economic reforms, contemporary laws and the creation of an environment that is attractive to foreign investors. Much work is needed towards the reduction of the role of the state in the economy and the development of a dynamic private sector.

The keyword is “Diversification of the economy”. Even countries like Saudi Arabia began to realize the importance of a modern diversified economy. Oil will not last forever. According to a World Bank assessment: Kazakhstan economy is vulnerable to external shocks.

“External demand from China and the Russian Federation, Kazakhstan’s main trading partners, as well as global oil demand and prices, will continue to be the key external factors impacting Kazakhstan’s economic performance. Domestic factors include the pace of implementation of structural and institutional reforms.”

Since the big fall in oil prices in the summer of 2014 economic growth fell sharply registering 0.4% in 2016. Thankfully as oil prices recovered, the economy has also improved. The gross domestic product GDP grew by 4.3% year-on-year (Y-o-Y) in the first nine months of 2017. The improved performance in the oil sector resulted in the recovery of the construction, manufacturing, trade and agriculture sectors.

According to Astana International Finance Centre: “The Minister of National Economy Timur Suleimenov acknowledged in October 2017 his country’s high dependence on hydrocarbon exports, albeit adding that the share of oil and natural gas had shrunk during the past eight years. He also said that insufficient investment in the non-energy infrastructure was the leading cause of Kazakhstan’s failure to diversify away from the extractive industries”

This candid admission must spur the government to do more in diversifying the economy and to reduce reliance on the energy sector as part of the economic agenda. This is not to say oil and gas are less important, but the vulnerability to geo-political shocks and over production creating glut in the market can cause havoc to the economy which relies on oil

Most analysts agree that favourable terms of trade has improved the trade balance but FDI (Foreign Direct Investment) has decreased. Assuming the program of structural reforms is successful, the diversification program will go forward and improve the economic growth potential.

“The ongoing structural and institutional reforms under the 100 Concrete Steps program and the privatization agenda aim to reduce the role of the state in the economy and facilitate the development of a vibrant, modern and innovative tradable non-oil sector”.

It is imperative that the state adopts disciplined fiscal and monetary policies that can sustain the economic and price stability and attract local and foreign investments in the non-oil sector. All this should contribute to the reduction of poverty which is the main challenge facing the government.

WHY DIVERSIFICATION AWAY FROM OIL IS IMPORTANT?

In the case of Kazakhstan which is an oil-based economy this is particularly import. The global interest in renewable energy such as sun power, the development of the electric vehicle and the rise of US oil production will impact the oil prices. The volatility makes it vital to develop alternative additional sources of income.

The diversification program must include a comprehensive and well thought out program of privatization of key industries and utilities. The private sector is better at managing resources than government and it is more efficient and competitive. In theory it should be more successful and profitable. The government must cease to be the main provider of jobs and money. Banks rely on government for their business. This must change.

The government continued its fiscal consolidation program by cutting the nonoil deficit further, excluding a one-off transfer for a bank bailout program. Like its equivalents in Turkey and other emerging economies, the National Bank of Kazakhstan (NBK) is wrestling with controlling easy credit and inflationary pressures through a variety of measures. It started cutting gradually its policy rate from 12 percent at the beginning of 2017 to 10.25 percent in August 2017.  But later in the year, it stopped loosening monetary policy further due to higher pressures on the tenge and domestic prices.

In the third quarter of 2017, the government injected the equivalent of US$6.5 billion (about 4 percent of GDP) into the Problem Loans Fund to accelerate the recovery of banks’ balance sheets; the NBK provided an additional US$2 billion (1.3 percent of GDP) to support ailing banks.

According to the AIFC (Astana International Finance Centre)’s Managing Director  MD Kairat Kelimbetov a former governor of the central bank, “the AIFC should attract up to $5 billion in FDI by no later than 2023 and up to $40 billion in a decade or so. The government sees it among the top 20 financial centres of Asia by 2028 and among the global top 30 by 2033–2038 (Primeminister.kz, January 31; Bnews.kz, October 24, 2017).”

The potential is good. A London FT report on November 17th stated that Investors scramble for Kazakhstan’s euro-denominated bonds despite risks.

The FT described it as a significant milestone that provides an additional boost to the national privatization plan, as Kazakhstan gears up for big sales in energy and other sectors. Strong fundamentals strong public sector and external balance sheets, lower level of debts and a large reserve of foreign currencies.