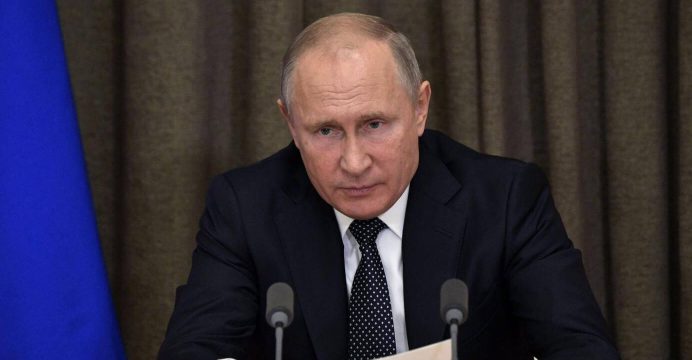 Russian President Vladimir Putin has expressed “serious concern” over Ukraine’s decision to impose martial law, the Kremlin said Tuesday, after a confrontation at sea between the two countries.

In a phone conversation with Chancellor Angela Merkel, Putin also said he hoped the German leader could intervene to rein in Kiev.

Putin “expressed a serious concern over Kiev’s decision to put its armed forces on alert and to introduce martial law,” the Kremlin said in a statement following the call.

Ukrainian President Petro Poroshenko speaks during a parliament session to review his proposal to introduce martial law for 60 days after Russia seized Ukrainian naval ships off the coast of Russia.

He also said he hoped “Berlin could influence the Ukrainian authorities to dissuade them from further reckless acts,” it added.

A fresh crisis unfolded on Sunday when Russian forces boarded and captured three Ukrainian ships, with Moscow accusing the vessels of illegally entering Russian waters off the coast of Crimea in the Sea of Azov.

The surge in tensions prompted the Ukranian parliament to vote Monday in favour of martial law in border areas for 30 days.