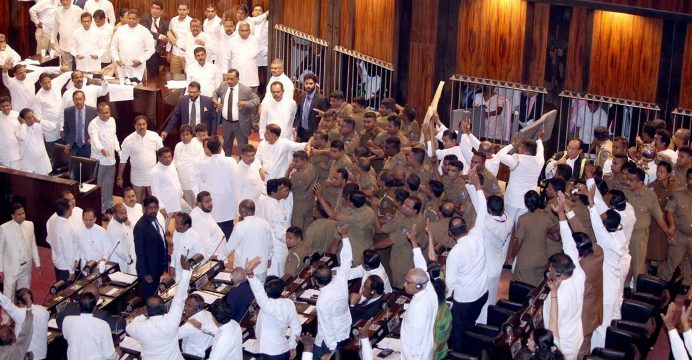 Sri Lanka’s parliament was adjourned after just five minutes on Monday after opening for the first time since MPs brawled and threw objects at each other last week.

The island has been politically paralysed since October 26 when President Maithripala Sirisena sacked prime minister Ranil Wickremesinghe and replaced him with Mahinda Rajapakse.

Rajapakse has lost two no-confidence votes and last week his supporters threw projectiles and chilli powder at their rivals and the speaker, deepening international concern.

Monday’s session was adjourned after five minutes as the 225-member assembly failed to agree on a committee to draw up the legislature’s agenda. They were to meet again on Friday.

Sirisena has also refused to accept the parliament’s no-confidence votes. Wickremesinghe for his part has refused to leave the prime minister’s official residence.

The rival factions held talks with Sirisena on Sunday night in a bid to negotiate an end to the crisis, but it ended in failure, according to the two sides.

After sacking Wickremesinghe last month, Sirisena initially suspended parliament and then dissolved it on November 9, calling snap elections for January 5.

However these moves were suspended by the Supreme Court last Tuesday pending an investigation. The legislature reconvened the following day but degenerated into a punch-up.

For 19 days, Sri Lanka had two claimants to the prime minister’s post — but on Thursday parliament speaker Karu Jayasuriya held that he would recognise neither.

Legislators on both sides say that with the administration at a standstill, key sectors such as tourism in the Indian Ocean island popular with visitors suffering badly.