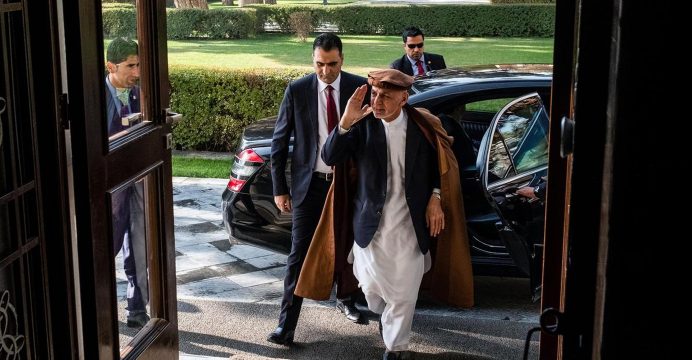 Afghan President Ashraf Ghani will seek re-election in 2019, his office announced Saturday, as potential rivals begin jockeying for the country’s top job ahead of the ballot.

Ghani, who was elected in a fraud-tainted poll in 2014 that was only resolved in a US-brokered power-sharing deal, is expected to present himself to war-weary voters as the candidate who can end the 17-year conflict.

The acerbic academic, who has a reputation for shouting at subordinates and micromanaging the unity government, will try to capitalise on renewed US-led efforts to engage the Taliban in peace talks, which are showing tentative signs of bearing fruit.

Ghani, who chose the widely feared ethnic Uzbek leader Abdul Rashid Dostum as his first running mate in the 2014 election, has not yet announced who he will pick this time round.

It also is not certain who will challenge Ghani in the April 20 ballot.

Former Balkh provincial governor Atta Mohammad Noor, whose refusal to stand down from his position sparked a months-long political crisis for Ghani, has previously expressed interest in the job.

Nominations open on November 10, the same day that the embattled Independent Election Commission is scheduled to release the results of last month’s shambolic parliamentary poll.

Ghani, an ethnic Pashtun, will need more than the support of Afghanistan’s largest ethnic group if he is to succeed at the ballot box and he has already started trying to win over rival ethnicities.

Vice President Dostum’s controversial return from exile in July was interpreted as an attempt by Ghani to secure votes from the minority group.

He took office in 2014 as US-led NATO combat troops withdrew from the country, sparking a resurgence in the Taliban which also coincided with the emergence of the Islamic State group in the region.

In February, under growing pressure from the international community which provides critical financial and military backing to the government, Ghani made a peace offer to the Taliban.

That was followed in June by an unprecedented ceasefire between Afghan troops and Taliban fighters that lasted three days and spurred hopes that peace was possible.

Taliban representatives have met with US officials at least twice in Qatar in recent months, most recently on October 12 with newly appointed US peace envoy Zalmay Khalilzad.