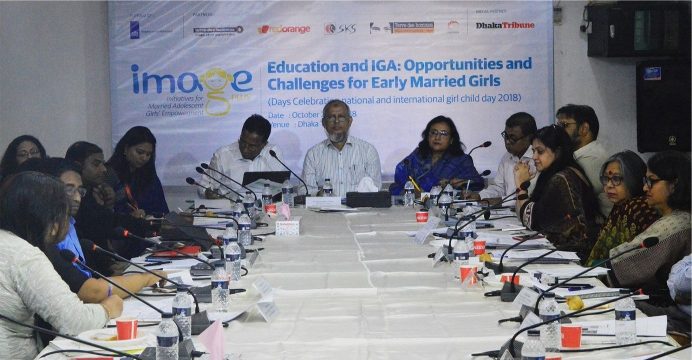 IMAGE Plus organized roundtable discussion on education and IGA in Dhaka

A special roundtable discussion by IMAGE Plus was held on 24th October 2018 represented by high level officials of the government, NGOs, INGOs and CSO organizations at the Dhaka Tribune Conference Hall in Dhaka to discuss the current situation of early married girls across Bangladesh and the way forward in achieving a better life for them in terms of education and income-generating activities.

The chief guest of the discussion was Anwarul Islam Sarker, Additional Secretary of the Ministry of Youth and Sports and special guests were Mahmuda Sharmeen Benu, Additional Secretary of Ministry of Women and Children Affairs and Md. Jahangir Alam, Director – Planning and Development of the Directorate of Technical Education. Mushfiqua Zaman Satiar, Senior Adviser, SRHR and Gender, Embassy of the Kingdom of the Netherlands was also present and a guest of honor. Representatives from UCEP, CARE Bangladesh, SKS Foundation, CAMPE, ILO, SDC, AYNA, Plan International, ActionAid Bangladesh, USAID, VSO and several others also actively participated in the discussions.

Initiatives for Married Adolescent Girls’ Empowerment or IMAGE Plus, a project working to ensure basic rights including sexual and reproductive health and rights (SRHR) including family planning, MCH, nutrition, Education, IGA and GBV of early married girls in Bangladesh, hosted the event in celebration of both National and International Girl Child Day 2018.

Anwarul Islam Sarker, Additional Secretary of the Ministry of Youth and Sports, said it is easy to speak of policies and outlines to contain early marriage, but it is an uphill task when it comes to executing those.

“Then again, we are doing great in stopping child marriage with the support of NGOs, the private sector and local administration,” he said.

Mahmuda Sharmeen Benu, Additional Secretary of MoWCA stated that the committees formed by the government in order to stop child marriage might become effective in decreasing the trend if the work in the upazila and union levels is conducted properly. If the provisions of Child Marriage Restraint Act 2017 are followed, the cases of child marriage will drop significantly in the coming days, she added in a hoping note.

Throughout the discussions concerns regarding the countries lack of a woman-friendly market system were raised as it hindered entrepreneurship opportunities of the early married girls especially in the rural areas. It was also stated that educational institutes should take pregnancy of child marriage victims into consideration as it derailed their progress in education. It was stressed that the girls have to be served their rights even after their marriage so they can avail education, ending up becoming self-empowered.

Mushfiqua Zaman Satiar, Senior Adviser of SRHR and Gender of the Netherlands Embassy, said in terms of economic contribution, the early married girls are almost invisible in the society. “Only education, skills and knowledge of rights cannot help them progress if their do not get backed by their better-halves and in-laws” said the Dutch embassy officials, who also called upon the media to play a bolder role to this end.

Social, family members’ and teachers’ mindset towards the girls married off in their early life needs to change, thus, paving the way for them to continue education, gather skills and get self-empowered, they viewed. Overall there were many positive statements and directives for the IMAGE Plus team from the government representatives and other discussants to help progress the work for the betterment of early married girls in the project and in Bangladesh overall.

Terre des Hommes Netherlands Bangladesh Office’s Country Director Mahmudul Kabir moderated the event where Farhana Jesmin Hasan, Project Director of IMAGE Plus, demonstrated a presentation on the project. Nakib Rajib Ahmed on behalf of IMAGE Plus and RedOrange Media and Communications welcomed everyone to the roundtable discussion.