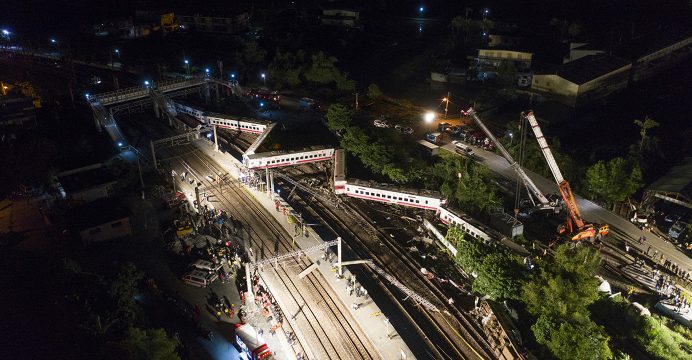 17 dead after train flips in Taiwan

At least 17 people have died after an express train derailed and flipped over on a popular coastal route in Taiwan on Sunday.

The Taiwan Railways Administration confirmed 17 people had been killed and said 132 people had also been injured in the accident in northeastern Yilan county.

Authorities have not confirmed if any passengers remain trapped alive
inside the train. An AFP reporter at the scene said that more bodies were being brought out of the wrecked carriages.

Images from the site showed the Puyuma Express train completely derailed and lying zig-zagged across the track.

All of the train’s eight carriages had derailed and five had flipped onto their side at Xinma station, the railways administration said.

One passenger told Apple Daily Taiwan that the train had been shaking during the journey.

Taiwan authorities said the accident had happened at 4:50 pm local time (0850 GMT) with no cause yet given.

The railways administration said there had been 366 people on board the service en route to the southern city of Taitung.

The defence ministry said it had sent in 120 soldiers to help the rescue.

President Tsai Ing-wen described the accident as a “major tragedy” in a Tweet Sunday evening.

“My thoughts are with all the victims and their families,” she added.