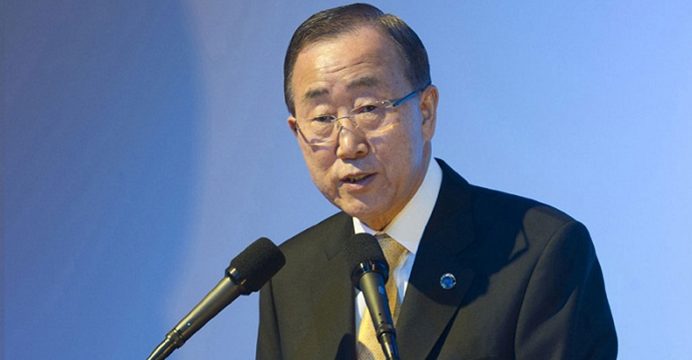 Former UN Secretary-General Ban Ki-moon has said Bangladesh is a role model in the world as it has taken many initiatives to cope with climate change impacts despite being a developing one.

Ban Ki-moon said this while addressing the launching of Global Commission on Adaptation (GCA) in the Netherlands on Monday, according to a message received here today.

The GCA is a new initiative to elevate the political visibility of climate change adaptation and focus on solutions. Prime Minister Sheikh Hasina along with the Presidents of South Africa, Senegal, Indonesia, Mexico, Costa Rica, Marshall Islands, Argentina, Premier of China, Chancellor of Germany, and Prime Ministers of the Netherlands, India, the UK, Canada, Denmark, Ethiopia and Grenada are the conveners of the GCA.

Speaking on the occasion, Ban Ki-moon appreciated the leadership of Prime Minister Sheikh Hasina for her role as a global leader in bringing the issue of adaptation in an emphatic and innovative way.

Noting that private funding in the developing world is a huge challenge, he urged the developed countries to come up with more funding.

Highlighting transboundary nature of climate, Anisul drew the attention of global community on the problem of melting of snow in the Himalayas at an alarming rate, and wished to see a Himalayan basin wide approach for more coordinated actions against the problems of climate change.

He also highlighted the presence of over one million of forcibly displaced Rohingyas from Myanmar and how they also aggravated the environment as Bangladesh has to provide them accommodation and means of living.

The environment minister assured that Bangladesh would continue to deal with the issue of climate change adaptation under the leadership of Prime Minister Sheikh Hasina as Bangladesh would like to build an eco-friendly and integrated South Asia, where Bangladesh shall continue to serve as a role model.

In his inaugurating speech, Dutch Prime Minister Mark Rutte referred to Bangladesh’s successes as well as challenges with regard to climate change adaptation.

The inaugural ceremony also included a video message from Bangladesh Prime Minister Sheikh Hasina, where she highlighted Bangladesh’s stellar successes in climate change related disaster risk reduction and climate change adaptation strategies and programmes, and assured Bangladesh’s own trend setting work to make the lives and living of Bangladesh people as safe and prosperous as possible.