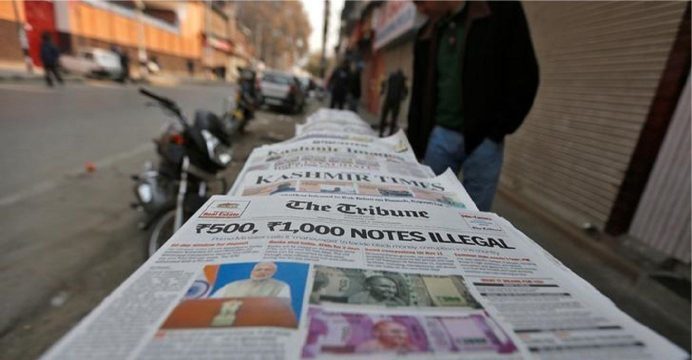 Newspapers still have future in India

Alternate media may be growing in India, but the conventional and mainstream medium including the newspapers still have future in the populous country.

India today emerges as a land of millions of smartphone & internet connected computer users, but there is a sizable population which lacks access to the new medium and continues to depend on the print media outlets.

Starting his speech with a big Namaste,  Gray, however, asserted that the basics of journalism in all media forms remain the same. The aspiring journalists must do proper groundwork before writing a story, whatever in the format, otherwise they might lose themselves in the crowd, he added.

Newspapers in an Indian shop

In this context, Gray said that journalists in Australia strive to maintain high professional standards, and enjoy a fair degree of job security and good pay package. He also pointed out that the Australian press is quite nationalistic, but it is issue-based and scribes do not shrink from constructive criticism. He also revealed that various media forms in Australia, including the press, radio-television and alternative media, all coexist in their own space in a dynamic landscape.

Gary, who has been on the internet since it first started and presently practicing journalism for many years in Australia after shifting from the United States of America, stated that various Indian issues are given due coverage by Australian media. But answering queries from the participants, he admitted that he had not come across any journalist of Indian origin active there.

“We do receive a good amount of write-ups from Indian contributors, though the quality is sometimes uneven. A considerable number of unskilled and inexperienced people are entering this field,” observed Gray adding that many media-house managements in India seem to prefer raw recruits rather than experienced journalists to cut down on expenses.

Admitted that more people now turn to their smartphones for fresh news rather than looking for traditional media outlets, Gray cautioned it has finally helped fake news to penetrate their minds. Moreover, it is too difficult to distinguish the real from the fake, which are manufactured with misinformation and even disinformation, he maintained.

Agreeing that fake news is emerging as a major threat to both alternate as well as mainstream media, Gray said that this puts a greater responsibility on working journalists worth their salt. To maintain credibility and retain the trust of readers or viewers, he reminded, editor-journalists have all the more reason to be committed and pursue excellence in their chosen profession.