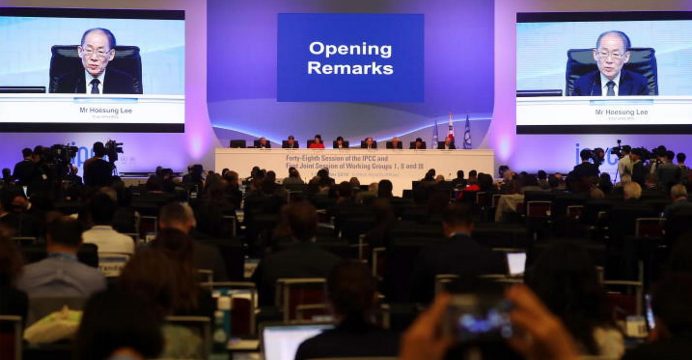 Already in overtime, a meeting of the 195-nation Intergovernmental Panel on Climate Change (IPCC) in Incheon, South Korea is vetting a major report that traces pathways for limiting global warming to 1.5 degrees Celsius (2.7 degrees Fahrenheit).

Most of these scenarios involve a sharp reduction in the use of fossil fuels — Saudi Arabia’s key export.

“We are very concerned that a single country is threatening to hold up adoption of the IPCC Special Report if scientific findings are not changed or deleted according to its demands,” said an informed observer who asked not to be named.

The source, along with two other persons with direct knowledge of the situation, identified the country as Saudi Arabia.

“This has become a battle between Saudi Arabia, a rich oil producer, and small island states threatened with extinction,” said another participant at the meeting who also requested anonymity.

“The report hangs in the balance,” the meeting’s chair said Saturday — a day after talks were due to end — before convening an emergency huddle of the IPCC’s half-dozen vice chairs, according to someone in the room.

A email to Saudi officials seeking comment was not answered, and delegates at the closed-door meeting were not accessible.