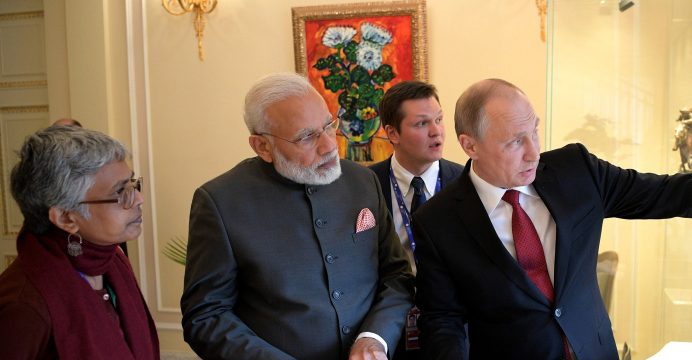 President Vladimir Putin was expected Friday to sign a deals in India worth more than $5 billion for the S-400 air defence system, despite US warnings of sanctions against countries buying Russian military hardware.

Russia building its second nuclear power plant in India is on the table too, as is the training of Indian astronauts in Russia for New Delhi’s first crewed space mission in 2022.

India, walking a tightrope between Russia and the United States while keeping a wary eye on China, is expected to seek sanctions waivers but President Donald Trump’s administration has signalled this is unlikely.

However, Washington is in a difficult position when it comes to New Delhi, seeking to bolster ties with India to counter China’s growing assertiveness while maintaining pressure on Russia.

Washington and New Delhi announced plans last month for joint military drills in 2019, and agreed on the exchange of sensitive military information. The US is now India’s second biggest arms supplier.

But Russia is still number one and is looking to remain so as India carrie out a $100-billion upgrade of its military hardware to counter potential threats from China and Pakistan.

“Russia is a time-tested friend. I am really glad some spine has finally been shown by India,” R.R. Subramanian, a Delhi-based strategic affairs analyst, told AFP.

“It’s about time we… showed that we are not going to be pushed around by Washington.”

Putin, accompanied by top officials including Foreign Minister Sergei Lavrov, and Modi are due to meet at 11:00 am (0530 GMT).

An exchange of agreements and press statements are scheduled for 2:30 pm.