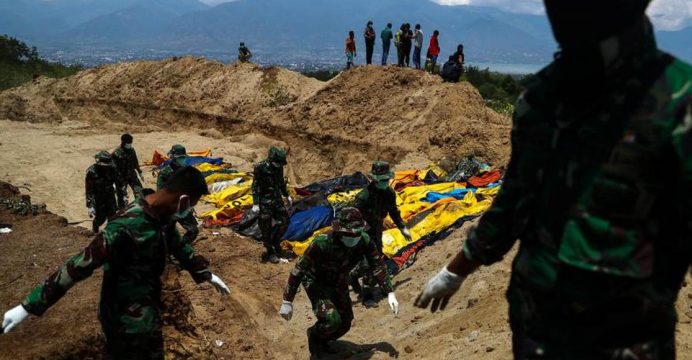 Indonesian soldiers ordered to fire on looters in disaster zone

Indonesian soldiers have been ordered to fire on people caught looting on the quake and tsunami-struck island of Sulawesi, a colonel said Wednesday, after desperate survivors raided shops for food and water.

Police have already arrested dozens of people for looting in the disaster zone around the seaside city of Palu, which has been reduced to rubble.

“If there is looting again, we will quickly fire a warning shot and then shoot to immobilise,” he told reporters in Palu.

“We could tolerate it (looting) on the first and second day because they needed those things. But on the third day, they started looting things like electronic equipment.”

He said every vehicle carrying supplies would be guarded by five armed soldiers.

In many cases, police have stood by as people raided shops for vital goods in short supply following the quake, which has left over 1,400 people dead.

The UN’s humanitarian office says almost 200,000 others need urgent help – – among them tens of thousands of children — with an estimated 66,000 homes destroyed or damaged.