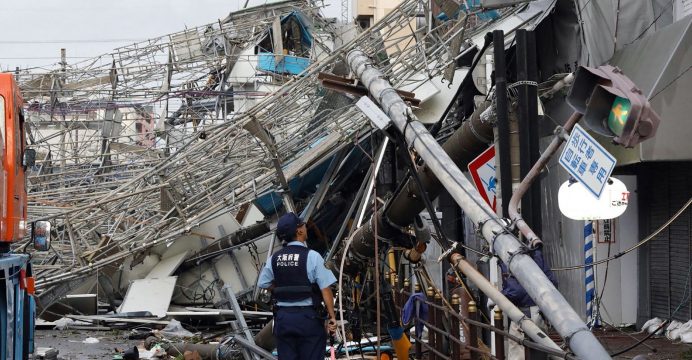 Two people have been killed in a powerful typhoon that battered Japan over the weekend, officials said Monday, as the storm’s aftermath brought travel chaos to Tokyo’s morning commute.

By Monday morning, Typhoon Trami had cleared Japan, but its powerful winds and heavy rainfall caused damage that blocked roads and train lines.

Local officials and police said two people had been killed in the storm. One was engulfed by a landslide in western Japan’s Tottori and the another drowned in high waters in Yamanashi, west of Tokyo.

Both men were believed to have died on Sunday, when the storm made landfall in western Japan.

Two more people were reported missing, and more than 120 people were injured in the powerful storm, public broadcaster NHK said.

Over 400,000 households, mainly in eastern Japan, were still without power on Monday morning. After pummelling Japan’s outlying islands including Okinawa, Trami made landfall south of the city of Osaka on Sunday night.

Local residents described “incredible winds and rain” that made it impossible to venture outside.

At its height, Trami packed gusts of 216 kilometres (134 miles) per hour, though it weakened as it moved over land.

The storm’s strength prompted rail authorities to take the highly unusual step of cancelling Sunday night train services in Tokyo, one of the world’s busiest networks.

The capital avoided a direct hit in the storm, but still saw fearsome winds and lashing rain that left the streets deserted.

Kansai Airport, which is situated on reclaimed land offshore in Osaka and suffered extensive damage in a storm earlier in September, reopened early Monday after closing its runways the previous day as a precaution.

Trami is the latest in a string of extreme weather and natural disasters to hit Japan, which has suffered typhoons, flooding, earthquakes and heatwaves in recent months, claiming scores of lives and causing extensive damage.

Some western regions are still recovering from Typhoon Jebi in early September, the most powerful typhoon to strike the country in a quarter of a century. It claimed 11 lives and shut down Kansai Airport.

Deadly record rainfall hit western Japan earlier this year, killing over 200 people, and the country also sweltered through one of the hottest summers on record.

And last month, a magnitude-6.6 earthquake rocked the northern island of Hokkaido, sparking landslides and killing more than 40 people.