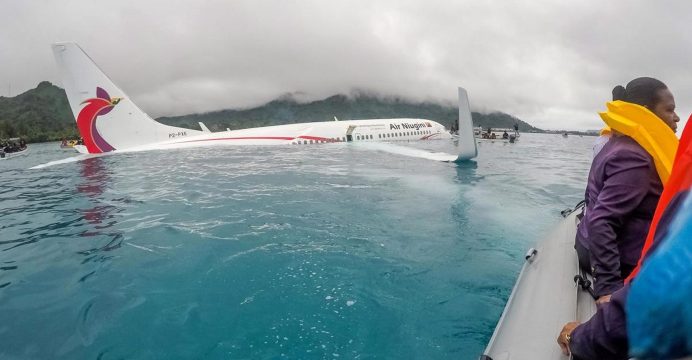 Air Niugini boeing 737 landing ended up in the ocean

An Air Niugini Boeing 737-800 has ended up in the ocean after landing short of the runway.

The aircraft, registered P2-PXE, was built in 2005 and is being leased from Avolon. It was operating flight PX-73 from Pohnpei to Chuuk with 35 passengers and 12 crew members when the incident occurred.

Final approach to runway 04 was executed in poor weather conditions, which is what ultimately led to the aircraft coming in too low and touching down in the sea 150 meters short of the runway threshold. Crew members initiated an evacuation and everyone onboard was able to evacuate with only a handful of injuries, mainly consisting of fractured bones. As a precautionary measure, everyone was later taken to hospital for a checkup.

Reportedly, some passengers were unaware that they had landed on water at first and had just thought it was a rough landing until the environment became buoyant and noisy. Other statements regarding the conditions at the time have outlined heavy rain and cloud cover throughout the entire approach.

Locals in their boats at the time are being praised for their rescue efforts.