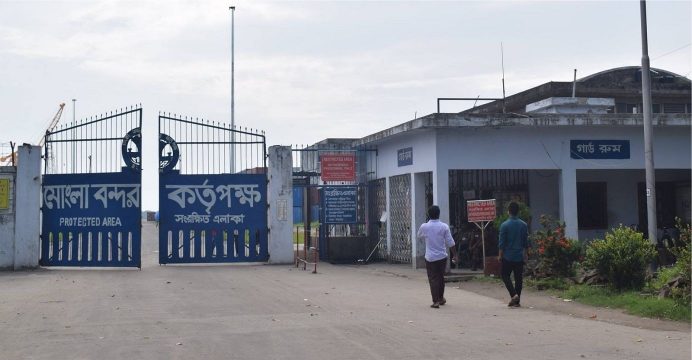 Syndicates of corrupt government employees and transport union leaders have been badly hampering the export and import business activities at the Mongla seaport and Burimari land port.

Businessmen are forced to pay bribes for the timely release of their goods from the ports, despite having valid documents.

The corruption takes place mainly in the offices of the customs and the port authorities, according to a new report based on surveys conducted at both the ports by Transparency International, Bangladesh (TIB).

TIB shared the findings at a press conference held at its Dhaka office. The surveys were conducted between July 2017 and September 2018.

The findings show that in fiscal 2016-17, the customs office at Mongla port took bribes of around Tk 15.69 crore for releasing goods while the Mongla Port Authority took Tk 4.61 crore as bribe.

During the same period, a total of Tk 17.10 lakh was illegally paid to the Burimari land port and customs station for releasing the goods. Some 8,550 goods-laden trucks had to pay extra Tk 200 each to amass the amount, the TIB said.

The revelations show that the corruption practice in Mongla port is so prevalent that the exporters and importers are compelled to pay the bribes to have their goods released, despite having the valid documents, Iftekharuzzaman, TIB’s executive director, said.

Citing an example of the corruption, the corruption watchdog chief said that a businessman imported 20 shallow engines but when he went to get them released, the customs officer demanded Tk 70,000 as bribe. This was despite the importer having the needed documents.

As he refused to pay, the customs officer asked him to conduct a physical test of all the diesel-run machines to ensure that it matched with the horsepower mentioned in the import documents.

Finally, the importer decided to pay the customs officer Tk 20,000, as testing each machine would be a time-consuming process, he said.

Highlighting the importance of Mongla port for the exporters and importers, Iftekharuzzaman said that 60 percent of the country’s imported vehicles were released through there annually. Moreover, clinkers, fertilizers, and coal are also imported in bulk quantity through this seaport.

Trucks at the land port cannot be hired without the help of a middleman, who takes Tk 400 as “toll” from each truck, the TIB said.

Furthermore, at Burimari land port at Lalmonirhat, the loading and unloading staffers are very powerful, because the importers and exporters are “hostages to them”, Iftekharuzzaman said. Businessmen have to pay Tk 200-Tk 500 as tips to them for loading and unloading goods from the trucks, he said.

The workers say the Tk 39 per tonne which is fixed for them is not adequate. They also demanded more than Tk 40 a tonne from the trucks coming to the land port from India and Bhutan at the land port, the TIB survey found.

Stressing on the importance of customs offices, TIB suggested quick digitization or making the export, import and customs paperless to stop the corruption.

The customs department is responsible for 2.65 percent of the country’s GDP and 31.62 percent of that revenue comes from exports and imports which mainly take place through those two land and seaport.