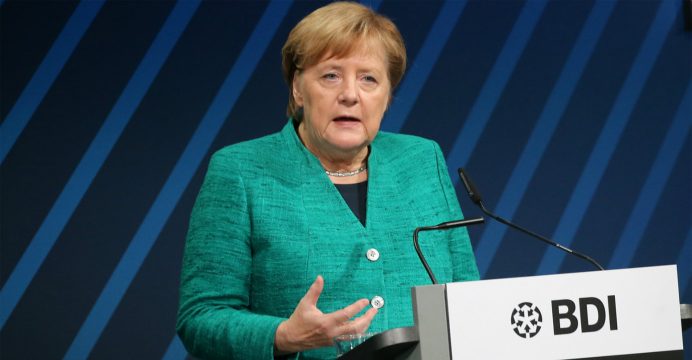 German Chancellor Angela Merkel said Tuesday that Britain had still not expressed a clear position on its post- Brexit relations with the EU, warning that only “six to eight weeks” remained to reach an agreement.

Success in the upcoming negotiations depended “largely on what it is Britain really wants, and on this the discussion has still not been entirely clear”, Merkel told a business conference in Berlin.

Merkel reiterated the stance of the remaining 27 EU members that “you can’t belong to a single market if you want to stick to just one of its principles but not the other three”.

Brussels believes May wants Britain to keep the benefits of free trade on goods with the EU without following its three other core principles, the free movement of people, services and capital over borders.

British Prime Minister Theresa May had hit back Friday at the EU after it roundly rejected her Brexit plan, saying its refusal to compromise was “not acceptable” and warning she was still prepared to walk away from the talks.

May blamed Brussels for the “impasse” just weeks ahead of a deadline to seal a deal — and six months before Britain leaves the EU in March.

The EU summit in Salzburg had also raised the stakes by putting on ice a special summit planned for November to seal a deal, saying it would only happen if there is progress next month.

Merkel said the November special summit would “probably” take place but warned that “six to eight weeks of intense work lie ahead in which we have to make political decisions”.

Progress could be achieved in October, she said, but added that any proposal should “formulate in the most concrete terms possible” what future relations should look like.

Otherwise, warned the chancellor, “the transition period could become too short to reach any kind of reasonable agreement”.

May’s government faces heightening pressure as it lacks a stable majority in parliament and could face defeat by MPs if and when it brings a final deal with Brussels for a vote.

Critics of May’s Brexit proposal have launched a “Save Brexit Campaign” to push for a clean break with the EU.

Polls show the country is still more or less divided on Brexit, although a narrow majority might now support staying in the EU.