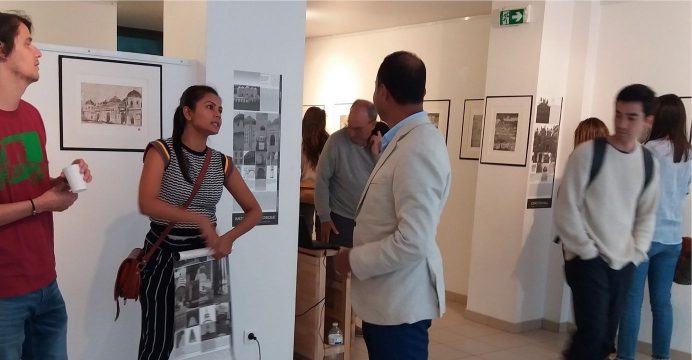 Gallery in Montmartre, Paris, France has organized the solo painting exhibition titled “Dhaka, I Love You” by Bangladeshi artist, Fawaz Rob. The exhibition was featured in French Newspaper “La Parisien”.

Fawaz Rob is an assistant professor at the Department of Architecture at North South University, Dhaka. His architectural etching and aquatint is set to represent Dhaka in a positive light to the rest of the world.

Fawaz Rob comes from Architectural and design background, but he is also an internationally celebrated artist. His works have been shown in Nepal, India, Italy, Croatia and France. He accumulates his urban experience and creates a dreamlike scenario of Dhaka city.

While Bangladesh gets an unfair share of negative publicity in the world media, Fawaz Rob tries to alter the perception through his art. As a protest to the recent declaration that Dhaka is the second least livable city, Fawaz Rob explores the life and architecture of the city through his printmaking. His art also explores the everyday life of construction, traffic, rickshaw, crow and other natural elements of Dhaka city. The backgrounds of most of his compositions feature charming forms, sharp contrast and brilliant depth. For the ongoing show, the artist is exhibiting around 30 etchings and aquatints on Bangladeshi handmade paper.

Fawaz Rob said, “There are many things to be proud of Dhaka city. It is not only the architecture of old Dhaka, but the harmony in which twenty million people of different religion and social class coexist. I feel when one quantifies a city through a statistical medium, much of the story gets lost. We tend to focus largely on traffic jam. However, this four-hundred-year-old city has many secrets hidden in her alleys. Mughals, British, French, and even Armenians have left architectural marks in the city.

Dhaka is also home to hundreds of mosques, temples and churches. It hosts one of the greatest architecture of the twentieth century– the national parliament building by Louis Kahn. Besides architecture, there are millions of beautiful stories happening every day in the lives of the people.

Most French people are unaware of Dhaka’s life and architecture. This exhibition is giving them a glimpse of an undiscovered city. French are surprised to know that there is a place named after the French called Forash Gonj (French village). Few hundred years ago, thousands of French spice traders used to live in Dhaka until British arrived and spice trading took a different route. There are still many buildings what carries the architectural motifs of French Gothic style.

Fawaz Rob obtained his undergraduate degree in San Francisco, USA and masters degree from Florence, Italy. He has worked in Los Angeles, San Francisco, Barcelona, Rome and Berlin before settling down in Dhaka as a university teacher.