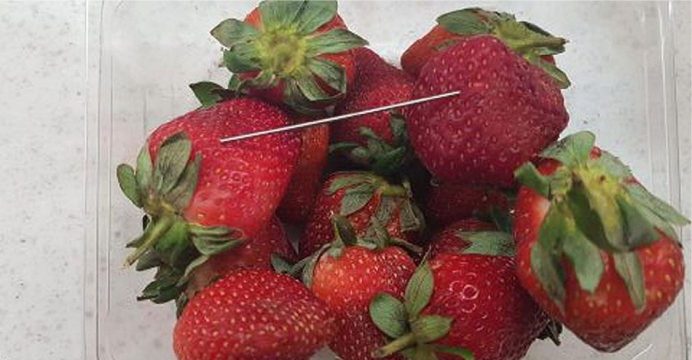 Australia plans to increase the maximum jail term to 15 years for anyone convicted of contaminating foodstuffs, Prime Minister Scott Morrison said on Wednesday, as a scare over needles found in strawberries and other fruits gripped the country.

Police are investigating more than 100 reports of needles found in fruit. Needles, first found in strawberries produced by one supplier in the northern state of Queensland, are now turning up around the country, reports Reuters.

On Tuesday, police in New South Wales said they were investigating incidents involving an apple and a banana. Nobody has sustained serious injury yet, and a senior Australian minister said many of the cases would turn out to be hoaxes.

But with demand plunging, strawberry farmers have been forced to dump produce, casting a shadow over an industry worth A$160 million ($115.84 million).

Responding to the scare, Morrison said his government would seek to increase the maximum jail term to 15 years from 10 years for anyone convicted of tampering with food.

The government will also move to criminalize hoax claims before parliament rises for a two-week holiday on Thursday, Morrison said.

“It’s not funny, putting the livelihoods of hard-working Australians at risk,” the prime minister told reporters in Canberra. “If you do that sort of thing in this country we will come after you and we will throw the book at you.”

Australia’s Attorney-General Christian Porter said that the government was looking at introducing a maximum 10-year jail sentence for hoaxers.

While farmers welcomed the government action, many said they face financial ruin if demand does not recover quickly.

“It is costing us a lot of money. On our own farm, (it costs) about $35,000 per day to harvest just the fruit we are dumping,” said Gavin Scurr, a strawberry grower in Wamuran, 64 KM (39 miles) north of Brisbane.