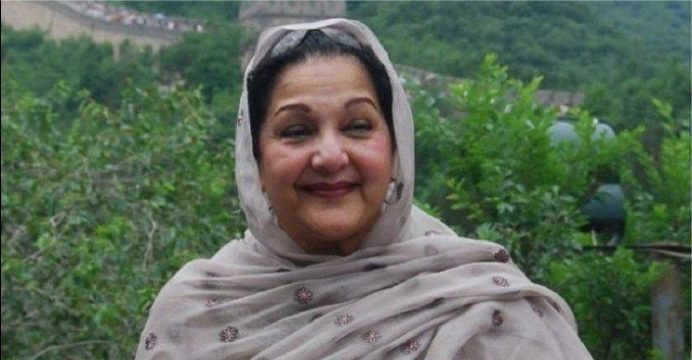 Kulsoom Nawaz, the wife of former Pakistan prime minister Nawaz Sharif, died of cancer in London on Tuesday as her husband remains locked up in jail in his home country following his fall from power.

Nawaz, 68, who was the first lady of Pakistan three times, was diagnosed with lymphoma in August last year and had been receiving treatment at a private hospital in London for months. “Yes, the death of Begum Kulsoom Nawaz is confirmed,” Maryam Aurangzeb, a spokesperson of Pakistan Muslim League-Nawaz (PML-N), Sharif’s party, told reporters.

Pakistani media reported that she had been put on life support and ventilator earlier in the day. Sharif was ousted from the premiership a month before his wife’s diagnosis. He and the couple’s daughter Maryam Nawaz had left her in London and returned to Pakistan on July 13 this year in a bid to motivate support for the PML-N days before a general election, reports BSS.

They were immediately jailed for corruption, with the party losing the July 25 election to Imran Khan’s Pakistan Tehreek-e-Insaf.

Sharif had been banned from running but maintained his control over his eponymous party, and his return was seen as a failed gamble to save his political legacy.

Kulsoom Nawaz had been at her husband’s side throughout his decades-long political career, which saw him become prime minister of Pakistan three times while facing military coups, prison and exile.

When he was first imprisoned after a military coup in 1999, she took over leadership of the party and led rallies in the streets.

The newly-elected Khan, a former cricket hero who had campaigned against the Sharifs for his entire 22-year-long political career, sent his condolences on Tuesday.

“The Pakistan High Commission in the UK has been directed to provide all possible assistance to facilitate the heirs of Mrs. Kulsoom Nawaz,” his office said in a statement.

“Mrs. Kulsoom Nawaz was a brave woman,” Khan was quoted as saying in the statement.

Since his dismissal by the Supreme Court last year Sharif has engaged in open confrontation with Pakistan’s security establishment, accusing the military of engineering his fall from power, curbing democratic development and fostering links with militants.