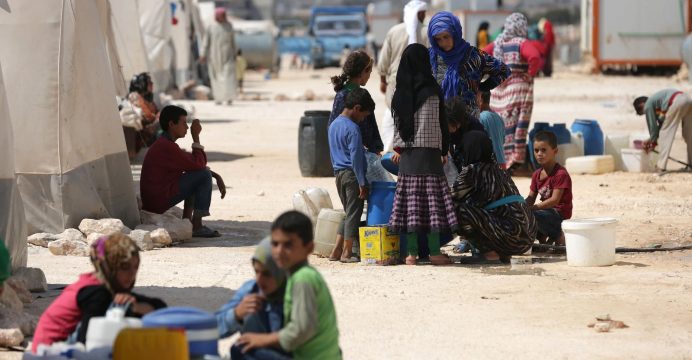 Violence in northwest Syria has displaced more than 30,000 people this month alone, the United Nations said Monday, warning that a looming assault could create the century’s “worst humanitarian catastrophe”.

Idlib province and adjacent rural areas form the largest piece of territory still held by Syria’s beleaguered rebels, worn down by a succession of government victories in recent months.

President Bashar al-Assad has now set his sights on Idlib, and his forces have stepped up bombardment of the densely populated province since the beginning of the month.

That has prompted an estimated 30,452 people to be displaced within Idlib and parts of adjacent Hama province between September 1 and 9, the UN’s humanitarian coordination agency (OCHA) said Monday.

“We’re deeply concerned about this recent escalation of violence, which has resulted in the displacement of over 30,000 in the area. That’s something we’re monitoring very closely,” OCHA spokesman David Swanson told AFP.

Many made a dash for Syria’s northern border with Turkey, with just under half seeking refuge in displacement camps and others living with local families or renting apartments.

An AFP correspondent in Idlib has seen dozens of displaced families head towards the frontier in recent days to escape bombing elsewhere.

On Monday, on the main highway running across the province, men on motorbikes headed north with their children on foot, herding dozens of sheep.