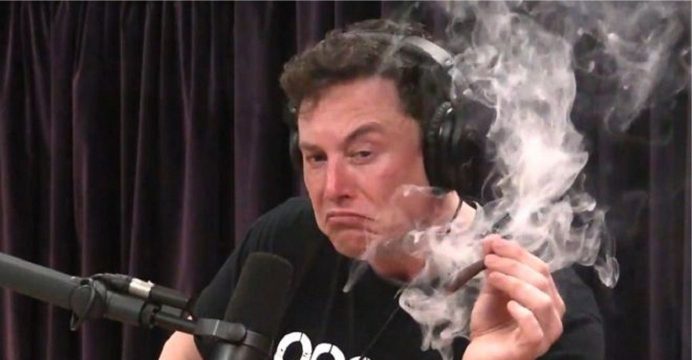 Tech entrepreneur Elon Musk has smoked marijuana live on the web during a podcast with comedian Joe Rogan.

Mr. Rogan offered his guest the drug, which is legal in California, as the pair discussed tech innovation and the public’s perception of Mr. Musk, reports BBC.

“I mean, it’s legal, right?” asked the Tesla founder, before taking a drag on the joint.

Last month, Mr. Musk said he was not “on weed” when he tweeted about plans to make Tesla a private firm.

The business leader made the comments in an interview with the New York Times. He also told the newspaper he works “120-hour weeks” and takes sedatives.

His controversial plans regarding Tesla’s ownership were dropped about two weeks later, following outrage from some investors.

In another development, Tesla’s chief accounting officer Dave Morton said he had resigned after only one month in the role, citing “the level of public attention placed on the company” among his reasons.

The firm’s head of HR, Gaby Toledano, also announced she would not rejoin the company after a leave of absence. Tesla shares fell more than 7% in early New York trading.

During the podcast, Mr. Rogan offered Mr. Musk a joint, which he said contained a mix of tobacco and marijuana – dried leaves and flowering parts of the female cannabis plant.

Of 50 US states, recreational cannabis remains illegal in 41 – but it was legalized in California, where the podcast was filmed, in January.

“Is that a cigar?” asked Mr. Musk when his host first proffered the joint.

He later added that he “almost never” smoked marijuana, noting, “I don’t find that it is very good for productivity”.

The pair also enjoyed whiskey during the podcast recording.

During their conversation, Mr. Musk talked about his health and his management of Tesla – which he said was the most challenging of his various businesses and projects.

To close the podcast, Mr. Musk was asked if he had any concluding remarks.

“I think people should be nicer to each other,” he said.

“And give… give more credit to others and don’t assume they’re mean until you know they’re actually mean.

“It’s easy to demonize people, you’re usually wrong about it, people are nicer than you think.”