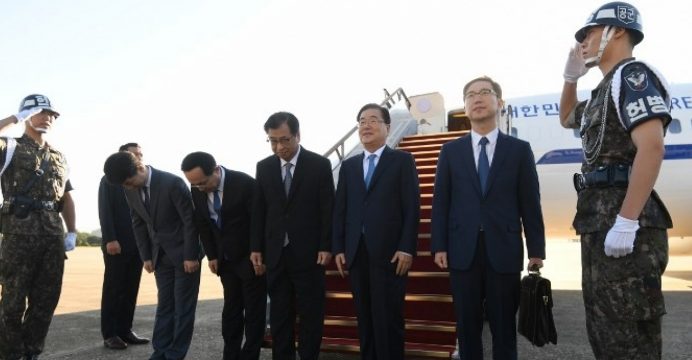 A high-level South Korean delegation met with Kim Jong Un in Pyongyang on Wednesday, as Seoul plans a new summit with the North Korean leader to break a deadlock in denuclearisation talks.

His delegation “met with Chairman Kim Jong Un and delivered a personal letter (from Moon) and exchanged opinions,” a presidential office spokesman in Seoul said.

The spokesman added that officials would fly back to Seoul later tonight after a dinner banquet but did not provide further details.

US President Donald Trump and North Korean leader Kim Jong Un reached a vague agreement at a landmark summit in June to work towards the denuclearisation of the Korean peninsula, but there has been little movement since.

The stated aim of the South Korean delegation’s day-long visit to Pyongyang is to finalise details of a third summit between the leaders of the two Koreas, due later this month.

But observers said that Moon’s personal letter to Kim will likely be a proposal aimed at breaking the denuclearisation impasse.

The envoy was likely to suggest “that Kim gives a firm commitment to presenting a list of nuclear weapons and fissile materials demanded by the US in return for a declaration of the end of the Korean War,” Yang Moo-jin of the University of North Korean Studies told AFP.

Despite the deadlock with the North, Trump expressed his hopes for the success of the next inter-Korean summit in a phone conversation with Moon on Tuesday.

Pyongyang has slammed Washington’s “gangster-like” demands for complete, verifiable and irreversible disarmament, and accused it of failing to reciprocate the North’s “goodwill measures”, including the handover of the remains of US troops killed in the 1950-53 Korean War.

When Kim and Moon met in April for their first summit, they agreed to push for a declaration from Washington of an end to the Korean War, to replace the 1953 armistice.

But US officials say the North must be rid of its nuclear weapons before that can happen.

The International Atomic Energy Agency reported last month that there is no indication North Korea has stopped its nuclear activities.