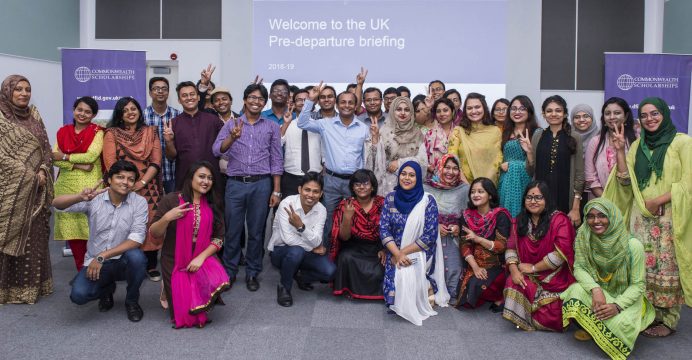 Commonwealth Scholarship awardees unite at the British Council in Dhaka

Md. Towhidur Rahman, Head of Higher Education and Regional Manager, South Asia Commonwealth Scholarship and Fellowship Plan (CSFP), conducted the briefing which was attended by 60 meritorious scholars and fellows from around the country, including 10 Commonwealth alumni. The scholars were presented with a range of useful information and tips during the briefing pertaining to issues of visa, accommodation, medical facilities, food, etc.

Chairman of UGC, Mr. Abdul Mannan opened the event with a brief note appreciating the contribution of the Commonwealth alumni both within and outside Bangladesh.

“It fills me with pride to see so many brilliant Bangladeshi students traveling to the UK with the prestigious Commonwealth scholarship and I hope you will represent your country in the most positive way,” he said to the audience.

Many of the scholars had already signed up for the Commonwealth Alumni Mentorship Plan (CAMP) as mentees to receive guidance from Commonwealth alumni mentors on academic support, life in the UK, professional development, etc. during their time in the UK. They were introduced to 10 mentors to establish rapport and facilitate communication between the pairs before their journey to the UK.

The mentors shared their scholarship experience and encouraged the scholars to reach out to them with queries. Two mentors also took short sessions on research writing and academic success which was well received by the participants.

As part of CAMP many of the mentees approached their mentors, exchanging contact details and getting into conversations regarding their challenge ahead. “It has been very useful to be introduced to my mentor face to face because it is going to make future communications so much easier,” expressed a scholar who had signed up as a mentee for CAMP.