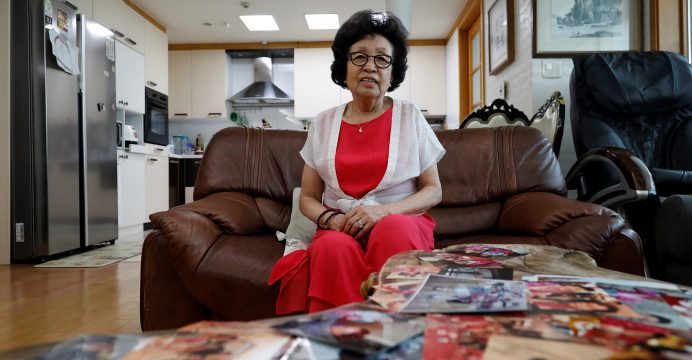 “Too much time has passed by, and it is over now,” he told Reuters, standing near his home within sight of the North Korean border. “I don’t think she is alive.”

During the Korean War, which raged up and down the peninsula for three years, Hwang’s family fled here to Gyodong Island, in what is now South Korea.

But his mother returned to their home in the North to prepare for a hoped for peace and was caught on the northern side of the heavily fortified border that divided the two Koreas after the 1953 armistice.

Kim Hyun-sook poses for photographs with an old photo showing her daughters, during an interview with Reuters at her home in Seoul, South Korea.

Hwang, now 77, stayed on Gyodong Island, even building a home within sight of North Korea, hoping one day his mother would return.

So far, there has only been silence.

With tensions on the Korean peninsula easing, North and South Korea plan to revive the cross-border family reunions that were halted three years ago as concerns over Pyongyang’s nuclear and missile programs mounted.

More than 57,000 South Korean survivors are registered with the South Korean government, hoping for a shot at a brief meeting with loved ones.

Just 93 South Koreans and 88 North Koreans have been selected for a new round of reunions that will begin on August 20 at a resort in North Korea’s Mt Kumgang, a popular tourist region.

“I still cry whenever I talk about my family, I will probably cry again once I see them,” said 82-year-old Bae Soon-hui, who was picked to meet her sisters for the first time since the war. “I was utterly in shock after hearing that I was selected.”