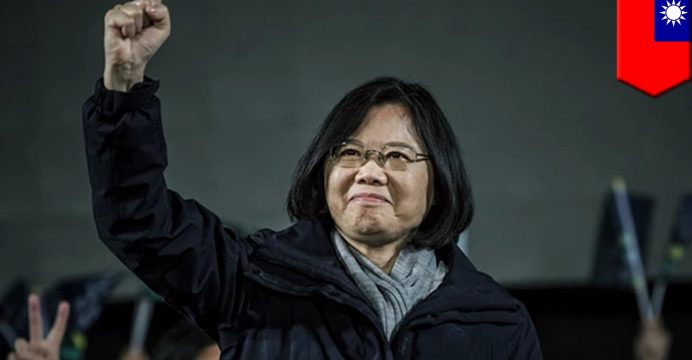 No one can ‘obliterate’ Taiwan’s existence, president says on departure for U.S.

Vowing that “no one can obliterate Taiwan’s existence”, President Tsai Ing-wen left on Sunday for the United States and two of its remaining diplomatic allies, amid pressure from China to try to stamp out references to the island internationally.

China, which claims self-ruled and democratic Taiwan as its own, has stepped up a campaign against the island as it tries to assert Chinese sovereignty. Beijing has ordered foreign companies to label Taiwan as part of China on their websites and is excluding Taiwan from as many international forums as it can.

Also, China has also been whittling down the number of countries that recognize Taiwan – now just 18 – with Burkina Faso and the Dominican Republic switching relations to Beijing this year.

Speaking before her flight to Los Angeles, where she will spend one night prior to visiting Belize and Paraguay, Tsai struck a defiant tone.

“In going abroad, the whole world can see Taiwan; they can see our country as well as our support for democracy and freedom,” Tsai said. “We only need to be firm so that no one can obliterate Taiwan’s existence.”

China, which believes Tsai wants to push for Taiwan’s formal independence, has already complained to Washington about her U.S. stopovers, which include Houston on her way back.

The trip starts one day after Taiwan’s state-run refiner CPC Corp announced a deal valued at $25 billion to purchase liquefied natural gas from the United States over the next 25 years.

The deal was aimed at boosting trade relations with the United States by reducing its trade surplus and was also a sign of goodwill ahead of Tsai’s visit, a person familiar with the government’s thinking told Reuters.

Tsai, who says she wants to maintain the status quo with China, will also be looking to reaffirm Washington-Taipei ties and to shore up support ahead of local elections in Taiwan in November amid the escalating pressure from China.

During her U.S. stops, Tsai intends to meet Ed Royce, chairman of the U.S. House of Representatives Foreign Affairs Committee, according to two people with knowledge of the plans.

She will also meet with business representatives to discuss how Taiwan could drum up investment and procurement with the U.S., they said.

Washington has no formal ties with Taiwan but is the island’s strongest ally and sole foreign arms supplier.

Tsai’s U.S. stopovers come as China and the United States are engaged in a trade war, adding to Beijing’s irritation with Washington.