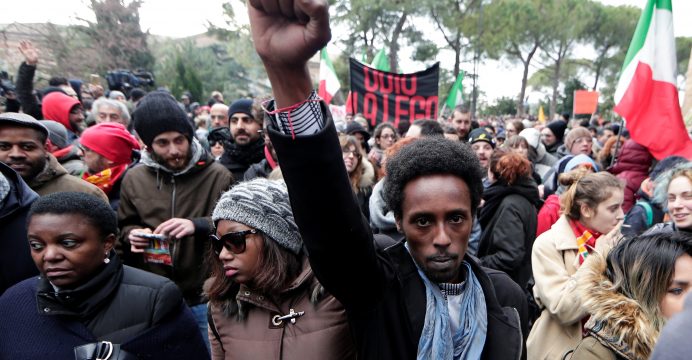 Migrant laborers staged a strike on Wednesday to protest at the deaths of 16 colleagues killed this week in two separate traffic accidents in southern Italy.

Thousands of migrants work in the southern heel of Italy during the summer months, harvesting tomatoes.

They are paid as little as 3 euros ($3.50) an hour, less than half the minimum wage for agricultural workers, and many have to live in shanty towns without water or electricity.

Twelve migrants died on Monday as they traveled home after a day in the fields, with their packed van smashing head-on into an on-coming lorry.

Two days earlier, four migrants died in a near identical accident. Both crashes happened close to the city of Foggia, near the Adriatic coast.

More than 200 migrants marched on Foggia from their camp, known as the “Great Ghetto”, some 10 km (6 miles) away.

“No to slavery,” they chanted as they walked along country roads under a fierce summer sun.

The protesters, most from sub-Sahara Africa, say their work is unregulated, allowing unscrupulous bosses to take advantage, packing them into over-crowded vans and driving them from one farm to another without any type of contract.

“We are treated like slaves but we don’t have any option,” said Ibrahim Sissoko, 28, from Mali, who arrived in Italy in 2015.

“There is no other work here for us and they know it, so they take advantage.”

The Italian government promised this week to crack down on labor abuses, but similar pledges in the past have come to nothing.