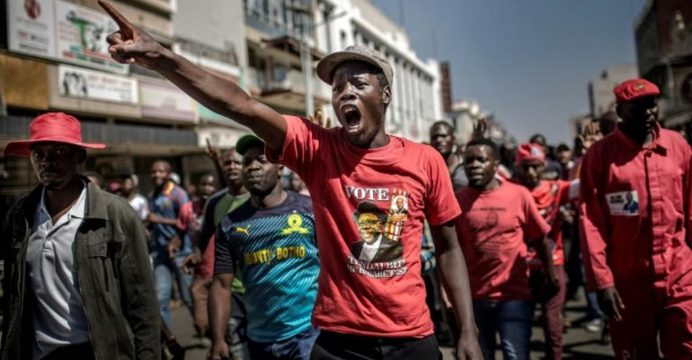 Magistrate Francis Vhitorini granted $50 bail to each of the Movement for Democratic Change (MDC) members.

“The court has indicated that it did not consider any of them to be a flight risk. The judgment was so brilliant that we are still trying to process it,” MDC lawyer Denford Halimani said.

Violence erupted last week after President Emmerson Mnangagwa and his ruling ZANU-PF party won a national election. The MDC disputes the outcome and says the vote was rigged.

Six people were killed in an army clampdown on protests in scenes reminiscent of the long and heavy-handed rule of Robert Mugabe. Mnangagwa replaced Mugabe when he was toppled last year in a de facto military coup.

Nelson Chamisa, Mnangagwa’s main rival, is expected to mount a court challenge against the election result this week. The MDC has said security forces were abducting its members in night raids to intimidate the party and stop it challenging Mnangagwa’s win in the presidential vote.

Zimbabwe’s foreign minister denied those accusations, telling diplomats that if there was any evidence the military would investigate the cases.

Zimbabweans had hoped the vote would rid the country of its global pariah status and launch an economic recovery, but have watched an all too familiar pattern where the ruling party is declared the winner and the opposition rejects the outcome.

Under the constitution, a losing presidential candidate has 7 days from when a winner is declared to challenge the result at the Constitutional Court. The Court must rule within 14 days. Mnangagwa’s inauguration would have to wait for the outcome of a court challenge.