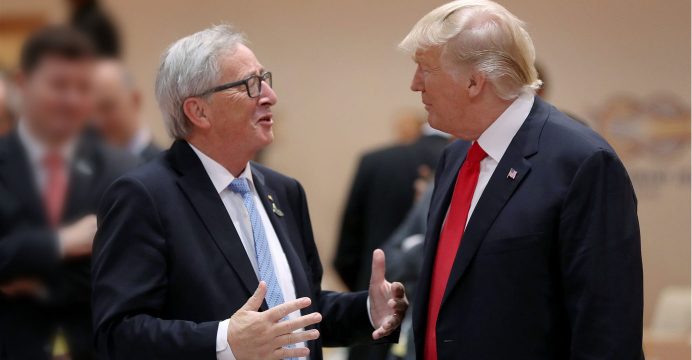 Who will come on top in the LNG War?

In July Jean-Claude Juncker, the President of the European Commission met US President Donald Trump to discuss EU US trade relations. The media reported that the EU and the U.S. struck a preliminary deal on trade, to ease tensions and prevent an open trade war. More significantly Trump and Junker declared that the EU will buy more products from the U.S., highlighting U.S. Liquefied Natural Gas (LNG)as one key product in the agreement.

“They want very much to do that, and we have plenty of it,” Trump said, referring to the U.S. shale boom, which has unleashed record supplies of the heating and power-plant fuel. “They will be a massive buyer, and they will be able to diversify their energy supply.”

LNG imports to Europe are poised to rise almost 20 percent by 2040 from 2016 levels, according to International Energy Agency. While Russia has long been the region’s top supplier, it’s now facing significant challenges from both the U.S. and Qatar, rivals with vast natural gas reserves.

The comments by Trump and Juncker come as at least four new U.S. LNG export projects are slated to start up by 2020. Since early 2016, the U.S. has shipped 41 cargoes of LNG to Europe, according to ship-tracking data compiled by Bloomberg. That’s about 10 percent of U.S. LNG exports. The critical questions – is the US competitive with gas from Russia and Qatar?

President Donald Trump and Jean-Claude Juncker at a previous meeting.

Analysts expressed doubts about the viability of the  EU/US LNG deal due to insufficient infrastructure on both sides of the Atlantic and tough competition from Russia which sells LNG to Europe at a relatively low price.

No doubt Russia’s image as a reliable supplier of gas had been tarnished due to geopolitical reasons relating to Russian military interventions in Ukraine, Crimea and Syria. But Brussels put aside the political differences and imported 193 billion cubic meters of Russian gas during 2017. Russia has been selling its natural gas for around $4.50 per million thermal units which is significantly lower than alternative sources. This fact alone might undermine the US efforts to get its LNG to Europe.

TRUMP IS CRITICAL OF GERMANY FOR RELYING ON RUSSIAN GAS

Meanwhile, in May this year, Trump criticised Angela Merkel the German Chancellor for supporting Russia gas project Nordstream 2. “Germany, as far as I’m concerned, is captive to Russia because it’s getting so much of its energy from Russia” Trump said.

“Nord Stream 2” a proposed gas export pipeline from Russia to Germany, capable of exporting 55 billion cubic meters annually, and companion to the currently operational Nord Streamline. The project has significant geopolitical risks, including further deepening the reliance on Russian gas amid aggressive behavior from Moscow in Europe and beyond.

QATAR A FORMIDABLE FORCE IN LNG

The US is also looking for the lucrative growing South East Asian markets, but Qatar is already doing good business in Asia and will compete for head to head with the US. Experts and analysts in the West believe that Qatar has the potential of becoming the dominant force in the export of LNG to Asia. A new complicating factor may favor Qatar. On Friday 3rd August S&P Global Platts reported that China may impose 25% tariffs on American cargoes of LNG if President Donald Trump follows through on his threat to escalate the trade dispute with Beijing that he initiated.

Qatar is not absent from Europe either. It already supplies 30% of the United Kingdom natural gas requirements. Qatar has plans to increase production of LNG (liquefied natural gas) by 30% over the next few years becoming a top global player in the export of natural gas.

CNBC reported in July last year that “Qatar Petroleum plans to boost gas production from its giant North Field, which it shares with Iran, by 20 percent. Qatar in April this year lifted a self-imposed ban on development of the North Field, the world’s biggest natural gas field, and announced a new project to develop its southern section, increasing output in five to seven years”.

Despite widespread forecasts indicating an LNG glut, China’s attempts to combat pollution led to a 4 3% increase in LNG imports in 2017, with Qatar often acting as a “swing supplier”, increasing its exports to the region to meet demand spikes. The sort of role that Saudi Arabia had played for many years in increasing or decreasing supplies of crude oil according to market requirements.

According to a research report by BMI (Business Monitor International) LNG exports from Qatar to China increased 49% in 2017, and were more than double the 5mn tonnes per annum contract volumes that are in place, BMI noted.

“Qatar remains well-positioned to continue being the biggest supplier of LNG to global markets supported by low production costs and the presence of necessary infrastructure. Also, Qatar’s strategic location, giving the country access to potential export markets, will support Doha’s ambitious plans and help expand its presence in Asia”

With increasing demand for natural gas, Asia will continue being a focal point of competition for market share over BMI’s forecast period.

Despite competition from Australia’s LNG supplies, Qatar will remain the dominant supplier of LNG to Asia. Demand for LNG is escalating in emerging markets and Qatar is geared to meet this growing demand.