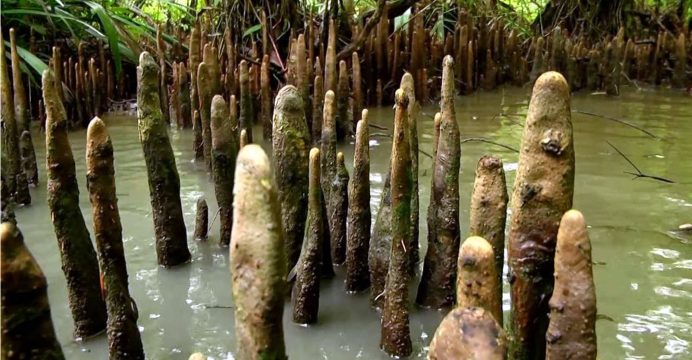 Diversified mangrove plantation to save vulnerable coastal communities in Bangladesh

Over 1,76,000 mangroves seedlings of 10 diversified species have been planted and raised over the last year in 10 different forest ranges in a bid to increase natural protection of coastal residents in Bangladesh.

The ‘Integrating Community-based Adaptation into Afforestation and Reforestation Programmes in Bangladesh (ICBA-AR)’ of United Nations Development Programme led the Mangrove plantation, considered to be an effective measure to reduce vulnerabilities and hazards of extreme climate events like cyclones, sea level rise and tidal surges.

Over 200 hectares along the Barguna, Patuakhali, Bhola and Noakhali coastline have been covered in line with the top most coastal area adaptation priority set by the National Adaptation Plan of Actions (NAPA), the Bangladesh Climate Change Strategy and Action Plan (BCCSAP), and the Seventh Five-year Plan (2016-2020) of the government.

Bangladesh Forest Department has planted over 200,000 hectares of mangroves in last five decades since 1960s. However, a key barrier the initiatives faced was the adverse impact of lack of species diversification.

To help Bangladesh realise the full adaptive potential of coastal greenbelts, UNDP initiated ICBA-AR in 2016 aiming to increase species diversity in the coastal forest which will result in enhanced socio-economics benefits to local communities from the forests. The Programme endeavors to enhance resilience of climate vulnerable coastal community through livelihood diversification and by linking their livelihood aspiration with coastal greenbelt management.

Alongside that, the project works to increase awareness and actively involve local communities and other stakeholders in forest management and adaptation activities to improve local people’s benefit and ownership leaving to sustainable management of coastal forests.

A total of 650 hectares will be reforested under the project to protect coastal population from cyclones and other extreme winds.

UNDP has been working since 2009 with the Ministry of Environment, Forest and Climate Change and has planted 9,000 ha of mangrove and non-mangrove plantation that has increased country’s carbon sink capacity of 637,200 tons per year.