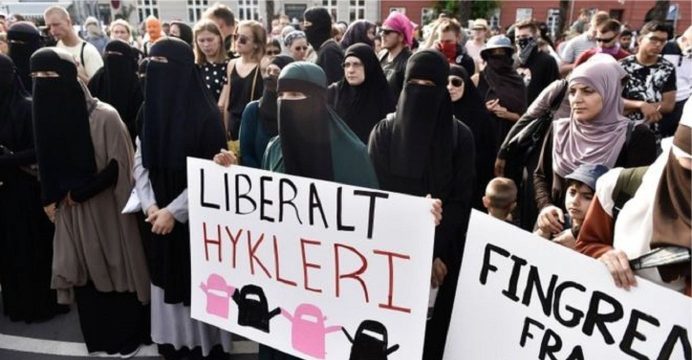 A woman has become the first person in Denmark to be charged with wearing a full-face veil in public after a ban came into effect on Wednesday.

The 28-year-old came to the police’s attention when a scuffle broke out between her and another woman at the top of an escalator at a shopping center north of Copenhagen, reports BBC.

She was fined when she refused to remove the veil. The new law has provoked protests and criticism from human rights groups.

It does not mention burkas and niqabs by name, but says “anyone who wears a garment that hides the face in public will be punished with a fine”.

An initial report into the altercation on Friday suggested that one woman was trying to remove the other’s veil, but police said this was not clear.

“During the fight her niqab came off, but by the time we arrived she had put it back on again,” police spokesperson David Borchersen told the Ritzau news agency.

Police reviewed CCTV footage to determine whether the second woman had intentionally pulled off the veil, and believed it was incidental to the fight.

On Wednesday night protesters gathered in the capital to demonstrate against law, with women in traditional burqas and veils standing alongside people with makeshift coverings.

Friday’s incident is reported to have taken place at a shopping center in Horsholm, 25km (15 miles) north of Copenhagen.

Human Rights Watch has labeled the ban “discriminatory” and said it was the “latest in a harmful trend.”

Last year the European Court of Human Rights upheld a similar Belgian ban, saying that communal harmony trumped an individual’s right to religious expression. Full or partial bans are also in place in France, Austria, Bulgaria and the German state of Bavaria.