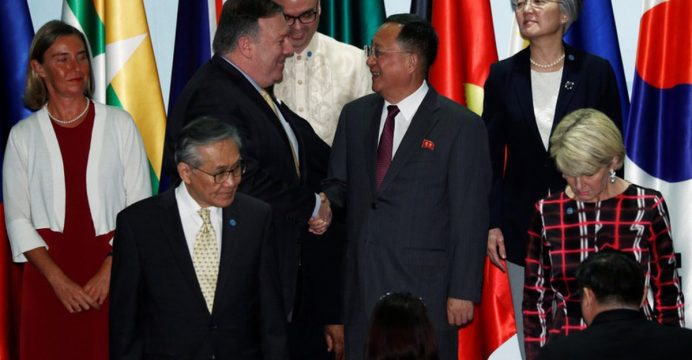 North Korea and the United States traded blows over implementing a disarmament deal adopted at a landmark summit in June, as Washington called for maintaining sanctions pressure against the North which in turn said it was alarmed at U.S. intentions.

The discord was the latest reminder of the difficulties that have long impaired efforts to negotiate an end to North Korea’s nuclear and missile programs, despite the June commitment made in Singapore by the leaders of the North and the United States.

“The DPRK stands firm in its determination and commitment for implementing the DPRK-U.S. Joint Statement in a responsible and good-faith manner,” North Korea’s Foreign Minister Ri Yong Ho told a regional forum held in Singapore on Saturday.

DPRK refers to his country’s official name, the Democratic People’s Republic of Korea.

“What is alarming however is the insistent moves manifested within the U.S. to go back to the old, far from its leader’s intention,” Ri said.

Ri made the statement after U.S. Secretary of State Mike Pompeo had left the conference for Indonesia, a State Department spokeswoman said.

At the summit on June 12, U.S. President Donald Trump and North Korean leader Kim Jong Un, who is seeking relief from tough sanctions, committed to work towards denuclearisation, but Pyongyang has offered no details on how it might go about this.

Pompeo pressed Southeast Asian nations in Singapore this week to maintain sanctions on North Korea but said he was optimistic that the deal to end the North’s nuclear program would work out.

“We have initiated goodwill measures of, inter alia, a moratorium on nuclear tests and rocket launch tests and dismantling of nuclear test ground,” Ri said in a statement delivered to the Association of Southeast Asian Nations (ASEAN) forum.

“However, the United States, instead of responding to these measures, is raising its voice louder for maintaining the sanctions against the DPRK and showing the attitude to retreat even from declaring the end of the war, a very basic and primary step for providing peace on the Korean peninsula.”

Pompeo suggested on Friday that continued work on weapons programs by North Korea was inconsistent with Kim’s commitment to denuclearize.

On Saturday, he stressed diplomatic and economic sanctions on the North must be maintained in order to achieve a complete end to the nuclear program, carried out in defiance of U.N. Security resolutions.

“I want to remind every nation that has supported these resolutions that this is a serious issue and something that we will discuss with Moscow,” he said.

“We expect the Russians and all countries to abide by the U.N. Security Council resolutions and enforce sanctions on North Korea.”

Russia has denied a report by the Wall Street Journal that said Moscow was allowing thousands of fresh North Korean laborers into the country and granting them work permits in a potential breach of U.N sanctions.