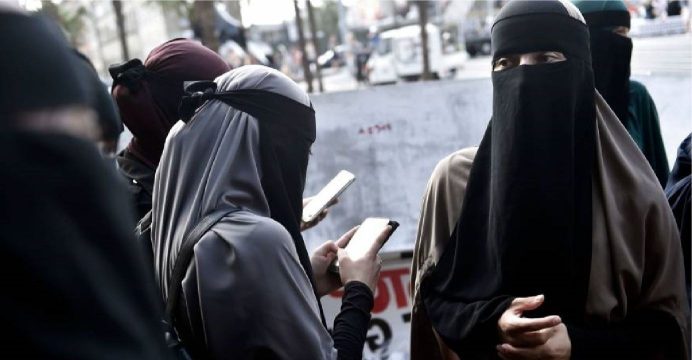 Around 1,300 Danes marched through Copenhagen in protest at a new ban on the wearing niqab

Around 1,300 Danes marched through Copenhagen on Wednesday in protest at a new ban on the wearing of face veils in public, accusing the government of infringing on women’s right to dress as they choose.

Denmark’s parliament enacted the ban in May, joining France and some other European Union countries to uphold what some politicians say are secular and democratic values, reports Reuters.

The protesters, many wearing the niqab veil or the all-enveloping, body-length burqa, marched from the central, left-wing district of Norrebro to Bellahoj police station on the outskirts of the capital. They formed a human chain around the station and then marched back to Norrebro before dispersing.

Demonstrators, often with children in tow, chanted “no racists in our streets” and “my life, my choice” during the three-hour rally. No incidents were reported. The marchers included non-niqab-wearing Muslim women and non-Muslim Danes with faces covered.

“We need to send a signal to the government that we will not bow to discrimination and a law that specifically targets a religious minority,” Sabina, 21, a niqab-garbed student, told reporters, asking that her full name not be used.

She is one of about 150-200 Muslim women – 0.1 percent of those in the country – who daily wear either the niqab or burqa garments covering the face or the entire body. Muslims account for around 5 percent of Denmark’s 5.7 million population.

Under the law, police will be able to instruct women to remove their veils or order them to leave public areas. Justice Minister Soren Pape Poulsen said officers would fine them and tell them to go home.

Despite its generic wording, the legislation is being widely interpreted as discriminating against Denmark’s Muslims and violating women’s right to freedom of expression and religion.

Critics, noting the tiny number of Muslim women in Denmark who actually wear a niqab, regard the law as largely a sop to increased anti-immigrant sentiment in the Nordic country.

“If the intention of this law was to protect women’s rights, it fails abjectly,” said Fotis Filippou, deputy Europe director of human rights group Amnesty International. “Instead, the law criminalizes women for their choice of clothing – making a mockery of the freedoms Denmark purports to uphold.”

Police said none of the veiled protesters would be penalized since certain uses of face veils, such as to exercise freedom of speech as part of a peaceful protest, are exempt from the law.

The justice ministry explained that the ban would focus on women forced by their families to wear veils, though it has been faulted for vagueness in stipulating who would fall afoul of it.

Danish Police Union chief Claus Oxfeldt said he would have preferred more comprehensive guidance on how to enforce the ban.

“We need as thorough guidance as possible so we don’t end up in situations where (police officers) don’t 100 percent know how to act,” he said.

As an example, he was unsure whether Asian tourists wearing anti-pollution masks would be covered by the ban.

France – with the largest Muslim community in the EU – as well as Belgium, the Netherlands, Bulgaria and the German state of Bavaria have all imposed some curbs on face veils in public.

France’s controversial 2011 ban added to a broader sense of alienation felt by many Muslims and some evidence surfaced that it encouraged assaults in the street on women wearing still legal headscarves as well.