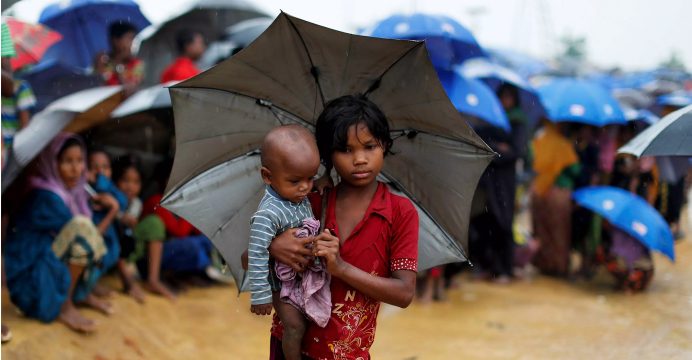 Thousands at risk of trafficking amid Rohingya refugee crisis

Thousands of people caught up in Bangladesh’s Rohingya refugee crisis are at risk of human trafficking, IOM, the UN Migration Agency, counter-trafficking experts have warned, stressing that the scourge of exploitation can only be tackled if authorities, local and international agencies, and communities work together.

The call for a multi-actor approach to prevent more refugees and members of the host community in Cox’s Bazar, Bangladesh, from falling victim to traffickers, came after government officials, military and police representatives, and IOM trafficking experts, yesterday joined a rally and public meeting in the town to mark World Day Against Human Trafficking.

Seventy-eight victims of trafficking have been identified and supported by IOM in Cox’s Bazar in the past ten months. Due to the complex and clandestine nature of the crime, it is recognised that this figure accounts for just a fraction of the true number of men, women and children trafficked during that period.

IOM Bangladesh’s Counter Trafficking Team has produced a series of three comic books which use real life stories to illustrate the dangers of trafficking to those affected by the Rohingya refugee crisis.

The influx brought the total number of Rohingya in the area to almost one million, prompting a massive humanitarian response to meet the needs of refugees and local communities, who struggled to deal with the impact of so many desperate people arriving in an area where many already lived in poverty.

The arrival of so many refugees, most of whom carried little or nothing with them in their flight from Myanmar, also created a new opportunity for traffickers to exploit some of the world’s most vulnerable people.

The calls for a joint approach to ending trafficking among those affected by the Rohingya crisis came as IOM Director General William Lacy Swing described trafficking as a crime “so pervasive it can only be tackled with a global, all-hands approach.”