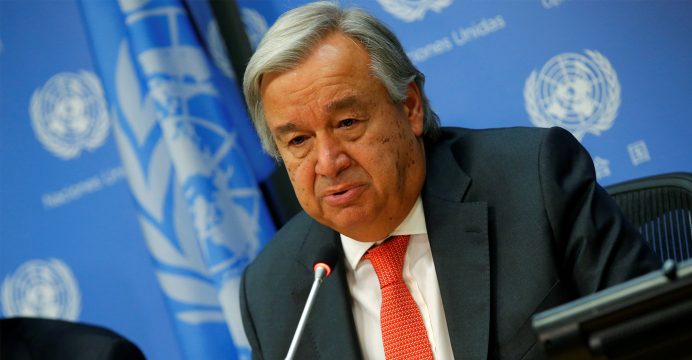 UN Secretary General Antonio Guterres is expected to discuss the North Korea crisis with Prime Minister Shinzo Abe during his visit to Japan next week, a UN spokeswoman said Tuesday.

Guterres will be in Tokyo for talks with Abe on August 8, before traveling to Nagasaki to attend the annual peace ceremony the following day.

The meeting comes amid reports that Abe is seeking a meeting with North Korean leader Kim Jong Un, possibly in September in the Russian Far East city of Vladivostok.

UN spokeswoman Eri Kaneko told reporters that “we can expect topics such as North Korea to come up” during Guterres’ talks with Abe.

Guterres will also discuss nuclear disarmament with the victims from both Hiroshima and Nagasaki, she added.

Last year, the UN chief dispatched an envoy, former UN political chief Jeffrey Feltman, to Pyongyang to try to persuade the leadership to hold talks with the United States.

That visit in December was seen as a key step in opening up North Korea’s door to engagement on ending the nuclear standoff.