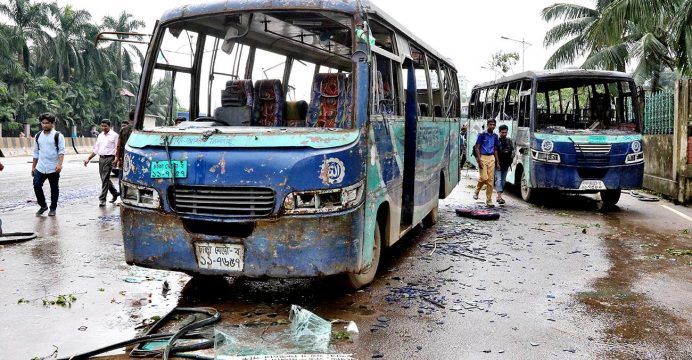 The identities of those arrested are yet to be confirmed.

Via an SMS, RAB confirmed to Dhaka Tribune on Monday that several of their members arrested the culprits from different parts of the capital, including Mirpur area, in an overnight drive on Sunday.

On Sunday, two college students were killed when an Uttara-bound bus of “Jabal-e-Noor Paribahan” rammed into a group of students. They had been waiting on the road for vehicles to return home after college.

Following the accident, outraged students and locals blocked the road, for about an hour after the accident, vandalized 50 to 60 vehicles, and set two buses on fire.

The students of Shaheed Ramiz Uddin Cantonment School and College continued their protests on Monday as well, blocking Airport Road from around 10:30am—halting traffic on both sides of the road.

They demanded justice, for the death of their schoolmates, by holding banners and chanting slogans.

Hundreds of students from other colleges in the city, including Adamjee Cantonment College, BAF Shaheen College, and Tejgaon Government Science College, also joined the demonstration. Dhaka College and Dhaka City College students blocked the Science Laboratory Intersection for about an hour.

A case was filed in connection with the incident on Sunday night.