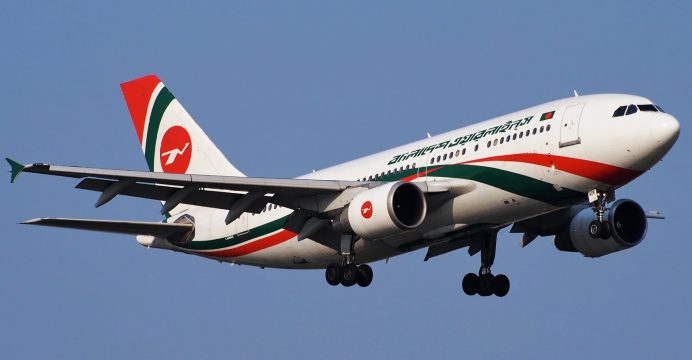 Flights in and out of Hazrat Shahjalal International Airport in Dhaka resumed, two hours after a Thai Airways aircraft’s ‘wheel burst’ halted operations.

“No flights could fly or land in and out of the airport since 12:30pm on Tuesday, because the Thai Airways plane blocked much of the runway. The operations however resumed around 2:30pm as the aircraft was removed from the runway,” civil aviation spokesman Rezaul Karim told bdnews24.com.

However, he could not confirm how many flights were delayed.

The Thai Airways’ TG 321 flight from Bangkok was scheduled to land at the airport about 12pm. The aircraft burst its wheels on landing due to a slippery runway, said an airport official.

“The Boeing 777 aircraft slipped to the grass, away from the runway. Civil aviation inspection officials visited the scene and found all the wheels on the right side of the aircraft damaged,” said Karim.

Airport Director Abdullah Al Farooq was not available for comment.

“The plane landed with a heavy jerk, triggering panic among passengers. Many were screaming,” a passenger told a TV channel.

“The situation was very bad,” said the passenger as he showed a picture of the damaged wheels on his mobile phone.