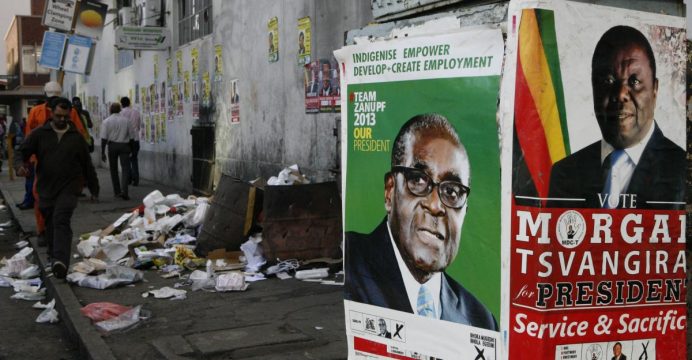 Zimbabwe’s July 30 presidential election will provide no clear winner, with 40 percent of voters choosing President Emmerson Mnangagwa and 37 percent his opponent, Nelson Chamisa, according to an Afrobarometer poll released on Friday.

The election will be the first since former leader Robert Mugabe was removed in a de facto coup in November and investors are watching closely in the hope it will spark an economic revival.

The poll of 2,400 voting-age adults conducted between June 25 and July 6 found 20 percent of people would not disclose their choice. If no candidate receives more than 50 percent of the vote there will be a runoff on Sept. 8.

The poll showed a much tighter contest than an early May survey, Afrobarometer said.

Chamisa’s Movement for Democratic Change (MDC) is more popular in urban areas while Mnangagwa’s ruling ZANU-PF has strong support in the countryside, the poll showed.

Dozens of people were killed in violence ahead of a runoff in 2008 between Mugabe and the MDC’s then leader Morgan Tsvangirai who eventually pulled out in an effort to end the bloodshed leaving Mugabe to win uncontested.

Chamisa, who took the helm at the MDC after Tsvangirai died in February, has threatened to dispute the result of the election due to alleged bias shown by the electoral commission and state media.

Western diplomats say the preparations for the election, including a biometric registration process, have been much cleaner and more thorough than for previous elections.