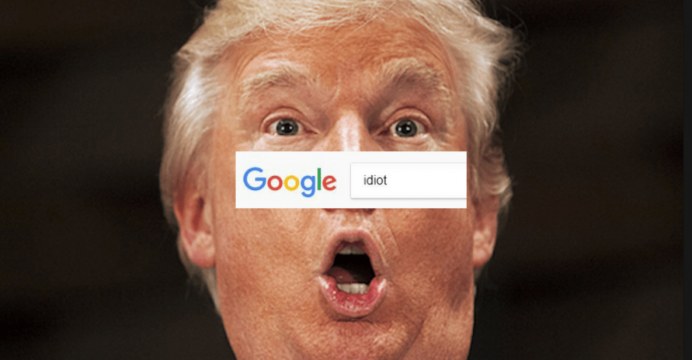 Protestors, activists and Internet users are seeking to influence Google’s algorithm so that when the term “idiot” is searched for, images of Trump pop up on Google. According to the Guardian, this began when British protestors used the Green Day hit “American Idiot” as the anthem for their demonstrations during Trump’s recent visit to the U.K. But now more users are taking advantage of that online association by up-voting a picture of Trump and the word “idiot” on Reddit.

As of Wednesday night, nine of the first ten results on Google Images searches for “idiot” were of or related to President Trump.

The tech giant said in a statement at the time:

“Sometimes Google search results from the internet can include disturbing content, even from innocuous queries. We assure you that the views expressed by such sites are not in any way endorsed by Google.

“Search engines are a reflection of the content and information that is available on the internet. A site’s ranking in Google’s search results relies heavily on computer algorithms using thousands of factors to calculate a page’s relevance to a given query.

“The beliefs and preferences of those who work at Google, as well as the opinions of the general public, do not determine or impact our search results.”

This is not the first time Google algorithms have been manipulated. In 2004, searching “Jew” returned a hook-nosed caricature. In 2009, searching “Michelle Obama” returned users a photo of the first lady retouched with ape-like traits. And before the last U.S. election, googling “rapist” would likely return at least five images of Bill Clinton in the top 10, the Guardian reports.