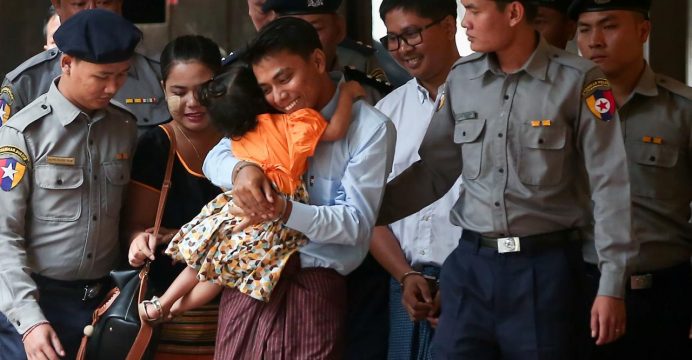 A Reuters reporter accused of obtaining secret state documents in Myanmar told a court on Monday a policeman had called him on the day he was arrested and insisted on a meeting, at which the officer abruptly handed some papers to him and a colleague.

In the first detailed account to the court from either of the journalists of the night they were arrested, Wa Lone told the judge that Police Lance Corporal Naing Lin had called him at least twice on Dec. 12 and said they needed to meet that day, even though it was already after office hours.

“After 5 p.m., when I was about to leave the office, Naing Lin called me and told me that I must come that evening. He told me that if I don’t come now, I might not be able to meet him because he is about to transfer to another region,” Wa Lone said.

Wa Lone, 32, and Kyaw Soe Oo, 28, are on trial for allegedly breaching the colonial-era Official Secrets Act, in a case seen as a test of press freedom in Myanmar. Both have pleaded not guilty. If convicted, they face up to 14 years in prison.

The circumstances of their arrest have emerged as one of the most contentious parts of the case. While the prosecution says that the two reporters were detained during a routine traffic stop, the defense has argued they were framed by police.

Wa Lone said Kyaw Soe Oo had accompanied him to the meeting with Naing Lin. When the two met Naing Lin and another policeman at a restaurant on the outskirts of Yangon, the officer handed them rolled up documents and told them to photograph the papers. They did not take pictures, instead telling Naing Lin it was too dark, he said.

“The documents had nothing to do with our conversation. He just suddenly took them out. I didn’t ask him to,” Wa Lone said.

soon afterwards, Naing Lin left abruptly, and the two reporters were arrested upon leaving the restaurant, before they looked at the documents, Wa Lone told the court.

In his testimony two months ago, Naing Lin confirmed he met the journalists, but denied giving them anything. He insisted he did not call Wa Lone and that it was the reporter who initiated the meeting. He also said he was alone.

A prosecution witness, however, Police Captain Moe Yan Naing, told the court in April that hours before the reporters were arrested a senior officer had ordered Naing Lin to plant the documents on Wa Lone to “trap” the reporter.

Other police witnesses have previously told the court the reporters were arrested at a random security checkpoint, by officers who were unaware they were journalists, and found to be holding secret documents in their hands.

Myanmar government spokesman Zaw Htay has declined to comment throughout the proceedings, saying Myanmar’s courts are independent and the case would be conducted according to the law. He did not answer calls seeking comment on Monday.

At the time of their arrest, the reporters had been working on an investigation into the killing of 10 Rohingya Muslim men and boys in the village of Inn Din in western Myanmar’s Rakhine State. The killings took place during a military crackdown that United Nations agencies say led to more than 700,000 Rohingya fleeing to neighboring Bangladesh.

“I tried to meet them (police) to get information on what happened in Inn Din. I didn’t meet them to get any documents,” Wa Lone said in his testimony.

Wa Lone and Kyaw Soe Oo’s case has attracted global attention, with many governments and rights groups calling for the reporters’ release. Some diplomats and activists say it is a test of progress towards full democracy under the administration of Nobel laureate Aung San Suu Kyi in a country where the military still wields considerable influence.

On Monday, with his pregnant wife, family members and several diplomats present in the courtroom, Wa Lone detailed his training as an investigative journalist. He emphasized he has covered Myanmar’s ethnic conflicts fairly and consistently sought input from all sides, including the government and security forces.

Kyaw Soe Oo is expected to testify on Tuesday.