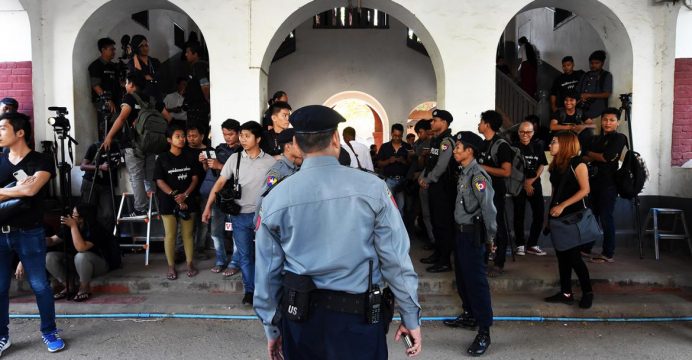 Myanmar police have arrested a prominent government critic on suspicion of violating sedition laws, the critic and media said on Friday, an offense that carries a maximum penalty of life imprisonment.

Ngar Min Swe was arrested at his home late on Thursday, news website Eleven Media, which belongs to one of Myanmar’s largest media groups, said. Reuters was unable to determine what prompted his arrest or his current whereabouts.

A police officer at the station in Hlaing township, where the arrest took place, said Ngar Min Swe was taken to Yangon’s Western District court on Friday. The officer declined to be identified and did not elaborate on what triggered the detention or on the identity of the complainant.

Police and government spokesmen based in the capital Naypyitaw did answer several calls seeking comment.

A photo of two police officers with Ngar Min Swe was posted with a message confirming his arrest on the Facebook page he operates under the alias “Sar Min Swe” on Thursday evening. Many people in Myanmar use pen names and aliases. It was not clear whether he had posted the message himself or if someone else had done so on his behalf.

Human rights activists say such arrests show room for free expression is shrinking under Nobel Laureate Aung San Suu Kyi’s government and the gains made in securing such freedoms since the end of military rule in 2011 risk being reversed.

“It is not fair at all to charge a person under a section (of the law) that can sentence him for his speech,” said Yangon-based free speech activist Maung Saung Kha.

Myanmar has detained at least 38 journalists since Suu Kyi came to power in 2016, according to Athan, a freedom of expression activist organization. These include two Reuters reporters who are on trial accused of breaching the Official Secrets Act.

Ngar Min Swe has been arrested under section 124A of the penal code, which says anyone who incites disaffection toward government “shall be punished with life imprisonment”, according to the Facebook post.

Ngar Min Swe, who wrote an opinion column in the state-run “The Global New Light of Myanmar” paper under the junta, has made wide-ranging criticisms of the current government, including over the crisis in western Rakhine state where 700,000 Rohingya Muslims have fled an army crackdown.

Ngar Min Swe is also being investigated separately in a case filed against him last year under the telecommunications law for a Facebook post he wrote about Suu Kyi. He faces up to two years in prison if convicted. Reuters was not able to contact his family and it was unclear if he has a lawyer yet.