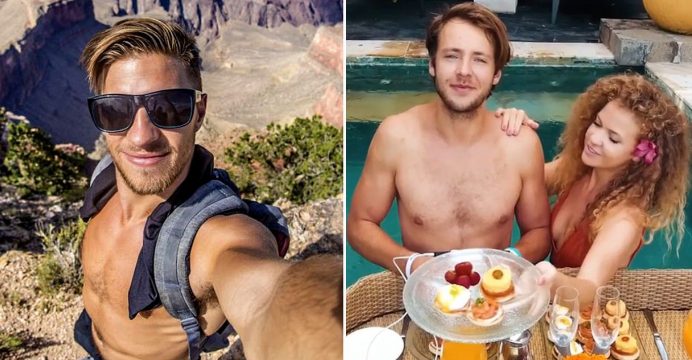 YouTube vloggers die in tragic accident after falling over waterfall

In a statement released on Wednesday, the Squamish RCMP wrote that, “On July 3rd, 2018, at 11:55 am Squamish RCMP received a call from BC Ambulance regarding three people who were swimming in one of the pools at the top of Shannon Falls.”

“The individuals were with a group of friends when they slipped and fell into a pool 30 metres below,” the police continued, adding that all three bodies had since been recovered, and the case was being referred to the British Columbia Coroners Service. They did not release the names of the deceased.

Day 76 – We’re 9.5 hours from home. The Great American Road Trip is coming to an end. It’s gonna be hard to rehabilitate back into “normal” life… waking up at normal hours in normal places, sleeping on a bed that isn’t travelling at 100kph, showering before I can smell myself, eating food that won’t make me 300lbs, etc, etc… Will miss this life. ?✌️

Shannon Falls is the third highest waterfall in British Columbia, reaching a height of 1,009 ft.

The accident occurred after Scraper slipped and fell off the waterfall, according to the Vancouver Sun. Gamble and Lyakh reportedly then got swept away by the water while trying to save her.

The British Columbia Coroners Service — who investigate all sudden and unexpected deaths in the province — told PEOPLE on Friday that they are in the early stages of investigating their deaths, although they could not confirm or release the identities of “the three decedents in their late 20s — one female and two males.”

In a YouTube video published on July 6, members of the group High on Life — a group that posts travel videos online — shared a tearful memorial for the three deceased vloggers.

“On July 3rd, 2018, we lost three very dear friends of ours: Ryker Gamble, Alexey Lyakh and Megan Scraper,” a member of the group said. “There are truly no words that can be said to ease the pain and the devastation we are all going through right now. They were three of the warmest, kindest, most driven and outgoing people that you could ever meet and the world has lost a good deal of light with their passing.”

According to the group’s Facebook page, High on Life was started in 2012, after Gamble, Lyakh and another friend named Parker Heuser gave up the lease on their apartment and decided to start traveling the world together. Scraper was dating Lyakh at the time of their deaths.

A GoFundMe page has also been created by the group to help pay for a memorial “to commemorate the beautiful lives and legacies that these 3 friends left behind.” Any additional funds will go towards travel arrangements and expenses for the families of the deceased.

Shortly before his death, Gamble shared a long message on Instagram about finding his “purpose” in life.

“When life is on purpose and I feel clear with my direction, all my other decisions seem to get easier,” he wrote, adding that “it took me 29 years to understand this.”

“So if you have a strong masculine core, and find yourself drained of energy, attention, and power, check in with this notion of your ‘purpose’ and see what comes up,” he continued. “Make purpose the focus above everything else in your life and watch how the rest will fall into place.”

After all three bodies had been removed from the water at Shannon Falls on Wednesday, an official with the Squamish Search and Rescue, John Wilcox, spoke with radio station News 1130 and urged all visitors to exercise extreme caution when visiting the waterfall.

“Areas like Shannon Falls have very polished granite, it’s very slippery with the mist and the lichen and etcetera that builds up around there-going in or near those pools has great risk,” Wilcox said. “It’s a very unfortunate circumstance hopefully we can all learn from.”