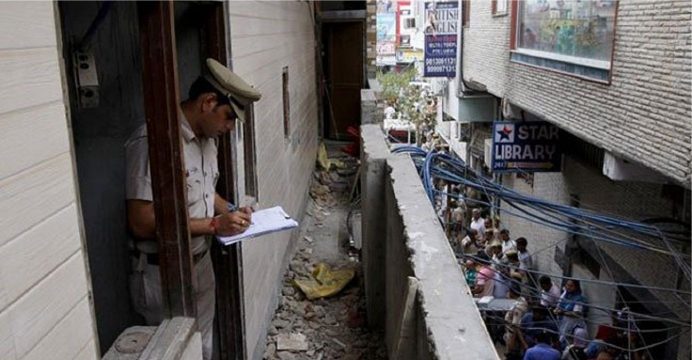 Eleven members of a family found dead in India

Eleven members of a family were found dead in India’s capital on Sunday, most of them hanging from the ceiling of their home, blindfolded, gagged and with hands tied behind the back, with police unable to offer any concrete explanation about what happened.

A police statement said some handwritten notes were found in the house “which point towards observance of some definite spiritual/mystical practices by the whole family”.

“These notes have a strong similarity with the manner in which the mouths, eyes etc of the deceased were tied and taped.”

This angle was being investigated and a case of murder registered, the statement said.

The home of those who died is above a grocery store the family owned in the Burari district in a northern part of Delhi, reports Reuters.

It is near to where three people were killed and several injured in a shootout between two gangs just two weeks ago, but police said there was no apparent link.

Sunday’s dead were four men and seven women, including teenagers and a 75-year-old woman who was found on the floor. The others were hanging from a railing attached to the ceiling, media reports said.

Police said the family included the woman, her two sons and their wives, a daughter and grandchildren. A neighbor found the victims early on Sunday, police said.

“I haven’t seen such a crime before,” said Vineet Kumar, additional deputy commissioner of police in north Delhi.

“We are investigating all possible angles including suicide, foul play. We can say something about the cause of death only after the postmortem reports come.”

All the family members had died and there were no witnesses. Neighbors had not heard anything untoward, police said.

According to media reports, the family migrated to the capital from the northwestern state of Rajasthan about two decades ago and police were trying to get in touch with relatives there.

On June 18, members of rival gangs opened fire on each other in the main Burari market, killing three people and wounding five.