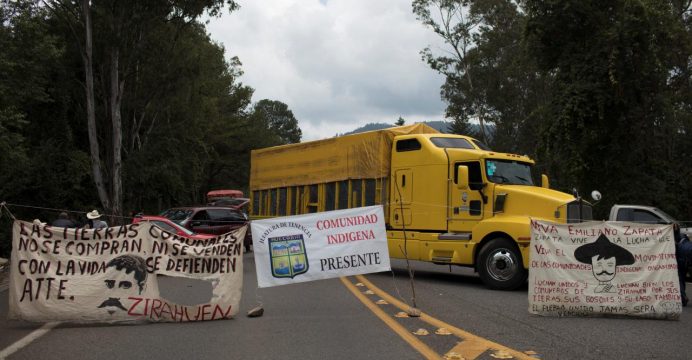 Mexican voters will stream to the polls this Sunday in a pivotal presidential contest, but leaders representing tens of thousands of indigenous people have vowed to block voting in their communities to protest a system they say has failed them.

Polls say Mexico is on the verge of electing its first leftist anti-establishment president in modern history, Andres Manuel Lopez Obrador. But the prospect of change has failed to resonate with inhabitants of small towns nestled in the lush, wooded countryside of southwestern Michoacan state.

Residents here have destroyed campaign signs and set up blockades to prevent the government from delivering ballots. Election officials have declared 16 towns here “unviable,” and will not likely risk confrontation to force polling stations to open.

Among the no-go zones is the impoverished hamlet of Nahuatzen, where Purepecha indigenous locals grow avocados and eke out a living on tiny plots. On Thursday, several dozen men, some in cowboy hats, stood vigil near the town’s entrance. They had laid a tree trunk across the road to stop outsiders from entering.

“The politicians haven’t done anything besides enrich themselves and they’ve left us behind,” said Antonio Arriola, a member of a recently-created indigenous council that has petitioned the Mexican government for autonomy.

After word spread on Friday that local party bosses may try to deliver ballots in their personal cars, indigenous leaders said they would use bulldozers to dig a trench in the main road to strengthen their blockade, a tactic already employed in a nearby town.

Arriola and other local leaders grudgingly acknowledged some common ground with Lopez Obrador, the 64-year-old former Mexico City mayor who got his start in politics decades ago advocating for indigenous rights.

But Arriola said the Purepecha have learned the hard way not to pin their hopes on promises coming from politicians, even ones that purport to have their best interests in mind.

“Our roads, schools and health care have been in the gutter for more than 40 years,” he said.

Nahuatzen is part of a growing movement among Mexico’s indigenous communities, who are seeking self-rule and turning their backs on mainstream elections.

Dissent in Michoacan ignited seven years ago, ahead of the 2012 presidential election, when just one jurisdiction, the municipality of Cheran, opted out of voting. This year, the boycott spread to six additional municipalities affecting dozens of polling stations across the 16 towns, home to at least 50,000 voters.

Agitation has likewise spread to traditional Maya communities in the southern Mexican states of Chiapas and Guerrero.

Indigenous leaders in at least six towns and small cities in those states are also pledging to block balloting on Sunday. That could impact tens of thousands more voters.

Electoral authorities may set up polling stations outside towns that have rejected them, allowing those who want to vote to do so, said Erika Barcenas, a lawyer based in Morelia, Michoacan’s capital, who advises communities that want more autonomy.

“But I think the view of the majority is a more global rejection, a rejection of political parties and of the kind of democracy we have right now,” she said.

The growing complaints of indigenous Mexicans appear to track a broader restlessness in the country, where widespread political corruption, drug violence and entrenched poverty have fueled discontent.

Support for democracy among Mexicans plummeted from slightly more than 70 percent in 2004 to just under half last year, according to data from the Latin America Public Opinion Project.