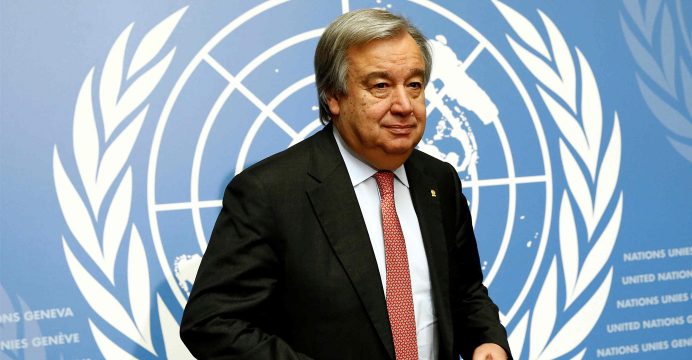 Guterres visit to assess progress towards return of Rohingyas

The UN Secretary-General Antonio Guterres will assess progress towards a safe, voluntary and dignified return of
Rohingyas during his visit to Bangladesh starting from July 1, said St‚phane Dujarric, spokesman for the secretary-general.

Around 700,000 Rohingyas took shelter in Bangladesh from Myanmar’s Rakhine state since last August following the brutal military actions termed by UN as “ethnic cleansing” and ” genocide” by rights groups.

The UN Secretary-General will arrive in Dhaka on July 1 on a joint visit with World Bank Group President Dr Jim Yong Kim to see Rohingyas situation on the ground and UN agencies’ engagement in the camps.

“They will review the situation of the newly arrived Rohingyas in Bangladesh and assess progress towards a safe, voluntary and dignified return of refugees, in line with international standards,” spokesperson Dujarric told reporters at a press briefing at UN HQ in New York on Thursday, according to UN’s global official website.

Their visit will highlight the generosity of Bangladesh in hosting the largest refugee influx of 2017 and the need of the international community to do more, he added.

The visit also aims to lay the groundwork for further dialogue with the Government of Bangladesh on medium-term planning for the refugee situation and to reiterate the UN and the World Bank’s support for finding comprehensive solutions to the situation of the Rohingya people.

In Dhaka, the Secretary-General and the President of the World Bank Group will have meetings with Bangladesh Prime Minister Sheikh Hasina and other higher authorities.

On 2 July, they will travel to Cox’s Bazar to visit Rohingya refugee communities and humanitarian workers and advocate for more donor support.

The Secretary-General and the President of the World Bank Group will be accompanied by the High Commissioner for Refugees (UNHCR), Filippo Grandi, and the Executive Director of the UN Population Fund (UNFPA), Dr. Natalia Kanem.

The UN expects the Secretary-General will be back in New York on 3 July.