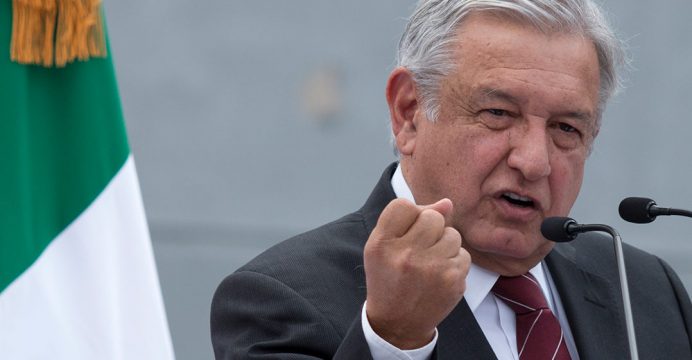 Leftist vows to cleanse Mexico of corruption, with victory beckoning

The hot favorite to win Mexico’s presidency, Andres Manuel Lopez Obrador, vowed to root out corruption and pacify the gang-ravaged country with a sweeping anti-establishment speech to a stadium full of supporters at his campaign finale.

A trenchant critic of the ruling elite, Lopez Obrador would become Mexico’s first left-leaning leader for decades if elected on Sunday, breaking the stranglehold of the ruling Institutional Revolutionary Party (PRI) and its conservative rivals.

Final polls show the former Mexico City mayor with a lead of more than 20 percent over his presidential opponents, PRI candidate Jose Antonio Meade and the second-placed Ricard Anaya of the center-right National Action Party (PAN).

Combining campaign pledges with a whistle-stop tour of Mexican political history, Lopez Obrador promised a “radical” government that would end unearned privilege, stamp out impunity and imbue the country with “moral authority”.

He promised to “pull up by its roots the corrupt regime” he blames for chronic violence and poverty.

Dressed in a dark suit and an open-necked white shirt, he compared his movement to Mexico’s great social upheavals, including the 1910 revolution, and said a new era was at hand.

“It’s going to be a peaceful, orderly but deep transformation,” Lopez Obrador said.

Critics accuse the 64-year-old of an authoritarian streak that will centralize power in the president’s office, comparing him to Venezuela’s socialist leaders.

However, Lopez Obrador said he would not be a “dictator,” promising to respect the rule of law and separation of powers.

He plans to review a major opening up of the oil industry to private capital in 2013-14, and wants to support farmers and unemployed youth. His rebellious past has unnerved some investors, although he has also courted Wall Street.

Though he has expressed admiration for the statist economic model that prevailed in Mexico before the 1980s, it is not clear how far he will try to steer the country to the left.

“He’s our only option for change,” said Marco Antonio Cortes, a 58-year-old from Ecatepec, a longtime PRI bastion on the edge of Mexico City. “I’m sick to death of the PRI.”

Vowing to take charge of security from 6 a.m. every morning, Lopez Obrador said he would make “all the necessary decisions” to fix the violence that has tainted Mexico under outgoing PRI President Enrique Pena Nieto and his PAN predecessor.

Lopez Obrador’s popularity has also grown in tandem with anger at the government’s failure to fire up the economy.

Mexico’s peso sank to a 1-1/2-year low this month, but its weakness has mostly been blamed on an emerging markets sell-off.

Deadlock in talks to rework the NAFTA trade agreement has also hurt the currency. If he wins, Lopez Obrador may have to strike a deal with U.S. President Donald Trump.

Lopez Obrador’s stubborn nature, sharp tongue and desire to upend politics have drawn comparisons to Trump. If Mexico and the United States keep sparring over trade and migration, critics fear the two men could prove a combustible mix.

His main rivals, Meade and the PAN’s Anaya, who is fronting a right-left coalition, were still fighting each other for second place as campaigning closed.

“Don’t believe the fake polls being sponsored by the government, our coalition is the only one that can beat Lopez Obrador,” Anaya told supporters in the city of Leon.

Meade told a crowd of backers “we are going to win” at a rally in the northern state of Coahuila, one of a dwindling number bastions of the PRI, which ruled Mexico for 71 years running until it was voted out for the first time in 2000.