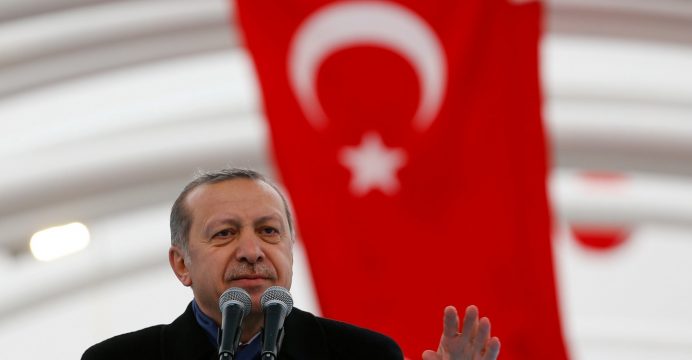 Turkish President Tayyip Erdogan could give his nationalist allies cabinet posts, sources said, rewarding their support for his AK Party in parliament and signaling a tough line against U.S.-backed Kurdish fighters in Syria and militants at home.

Erdogan won 53 percent of the vote in Sunday’s presidential election, extending his rule until at least 2023 – but now with the sweeping executive powers that Turks narrowly backed in a referendum last year.

The ruling AKP he founded fared less well, taking 43 percent in the parliamentary election held on the same day. But, allied with the hard-right Nationalist Movement Party (MHP), which won 11 percent, it will have a parliamentary majority.

The AKP, an Islamist-rooted, pro-business party which in its early years in power from 2002 appealed to the center-right and worked to bring Turkey closer to Europe, is now allied with a deeply nationalist party suspicious of foreign powers.

The MHP, founded by an ex-colonel involved in a 1960 military coup, is hostile to the Kurdish political movement and its base is seen as closely tied to the “Grey Wolves”, a nationalist youth group that fought street battles with leftists in the 1970s. Mehmet Ali Agca, who tried to assassinate Pope John Paul II in 1981, was a member of that movement.

“It is possible for there to be some names close to the MHP that the president deems appropriate in the cabinet,” an MHP official said, adding: “In the end, Erdogan will decide.”

A source close to Erdogan’s office said it would “not be a surprise” if the president appointed ministers close to the MHP to Turkey’s new cabinet.

Both sources spoke on the condition of anonymity. Erdogan’s office declined to comment. The MHP’s deputy chairman, Mustafa Kalayci, said any cabinet decisions would be taken by Erdogan.

“We will not have any expectations such as ‘We gave you this support, so give us five ministries’,” Kalayci told broadcaster CNN Turk.

Together, the two parties won 343 of parliament’s 600 seats, according to unofficial results. Although parliament has lost some of its powers under the new executive presidency, an opposition-controlled assembly would have been able to slow down lawmaking for Erdogan.