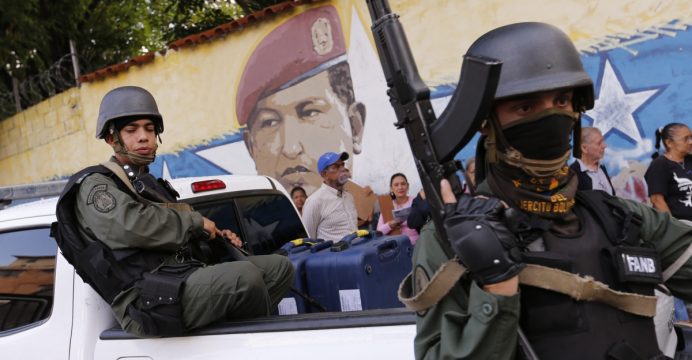 Venezuelan security forces have carried out hundreds of arbitrary killings under the guise of fighting crime, the UN’s human rights body says.

In a report, it cites “shocking” accounts of young men being killed during operations, often in poor districts, over the past three years.

The UN’s human rights chief said no-one was being held to account, suggesting the rule of law was “virtually absent”.

Venezuela has in the past dismissed human rights allegations as “lies”.

The country is going through a protracted political and economic crisis.

Venezuela has the world’s largest proven oil reserves. When socialist President Hugo Chávez was in power, from 1999 until his death in 2013, he used oil money to finance social programmes.

But the opposition says much of the income was lost to mismanagement, patronage, and corruption.

Last year dozens of protesters were killed in clashes during protests against hyperinflation and food shortages.

Mr Maduro was re-elected in May, in a poll boycotted by the opposition and criticised by the UN and other international bodies.

The UN Human Rights Council alleges that extra-judicial killings were carried out by officers involved with the Operations for the Liberation of the People, ostensibly a crime-reduction initiative.

These officers may have killed more than 500 people since July 2015 as a way to showcase crime-reduction results, it says. They are alleged to have faked evidence to make it look as though the victims died in exchanges of fire.

UN investigators have been denied access to Venezuela. They made their findings from interviews with about 150 witnesses and victims contacted through “internet-based technologies”, the report says.

A number of interview with exiles were also held in Geneva, it adds. Some of the other evidence comes from former Attorney General Luisa Ortega. She was fired by Mr Maduro last year and went into exile.

The report says that under her replacement, investigations into allegations of abuses have virtually stopped.

The grandmother of a man killed during an operation in March 2018 told UN investigators that 50 officers had broken into their home, all of them dressed in black with a skull symbol on their jackets.

“They woke my 23-year-old grandson up, handcuffed him with plastic ties and took him out,” she said. After a few minutes, the family heard gunshots. When they went downstairs to see what had happened, they were ordered back inside.

“Later, the forensic doctor told me that he had died of two gunshots to the chest and that he had been severely hit on the head.

“The police report mentioned that my grandson was carrying a gun and that he had opened fire against security forces, which is a lie. I want justice, he was a human being, not a dog.”