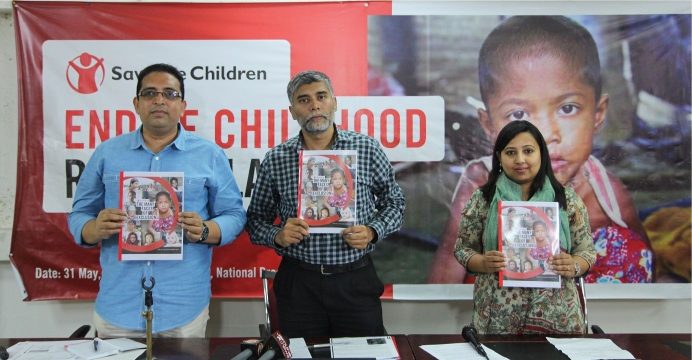 Bangladesh’s out-of-school rate drops by 27 percent in a year, but children with disabilities being left behind

Bangladesh has made the greatest gains of any South Asian country when it comes to children experiencing safe and happy childhoods, thanks largely to a dramatic improvement in the rate of children going to school, a new report by Save the Children reveals.

Launched on 31st May at National Press Club in the lead up to International Children’s Day on June 1st, The Many Faces of Exclusion examines countries on a range of indicators related to childhood like child marriage, teenage pregnancy and child mortality, allocating points for each.

Bangladesh scored 701 out of a possible 1,000 points, representing a 21 point improvement – the biggest increase of any country in South Asia – primarily due to one factor. In just 12 months, Bangladesh’s rate of children out-of-school rate has reduced by remarkable 27 percent, and by 36 percent over five years, according to UNESCO data.

Kamal Hossain, Director, HOPE project, Education Program made the keynote presentation at the launch. He said, “Around 80 percent of children with disabilities in Bangladesh do not go to school. They are not being prioritized, hence left behind right when they should be getting extra support to go to school. Not only is education a basic right for all, but school is the absolute best place for children with disabilities to be so they can take part in society, make friends, learn about the world and enjoy happy and healthy childhoods.”

“Current budgetary allocations for programs supporting children with disabilities to learn and get an education are miniscule compared to what is actually needed,” he said.

Present at the launch Save the Children’s Director of Program Development and Quality Mr Reefat Bin Sattar said that, while this represents major progress, not all groups are reaping the benefits.

“Bangladesh has made impressive development progress in recent years, particularly when it comes to access to schooling. However the education boom is not being enjoyed by all children, such as those living in extreme poverty, in isolated parts of the country or facing social exclusion,” Mr Sattar said.

“Not only is Save the Children calling for increased funding to support millions of children with disabilities in Bangladesh, but also for a better planning and budgeting system that works with local civil society organizations and elected representatives.”

The report also includes an ‘End of Childhood Index’, which ranks countries on where childhood is most and least threatened. Bangladesh ranked 130th overall, ahead of regional neighbors Pakistan (149) and Afghanistan (160), but well behind Sri Lanka (60), Myanmar (107) and India (113).

While the report highlights improvements in Bangladesh’s out-of-school rate, it shows that progress when it comes to other childhood ‘enders’ was slower: more than a third of Bangladeshi children under 5 still suffer from stunting, 44 percent of teenagers are married before they turn 20, and nearly 3.5 percent of children in Bangladesh do not survive to their fifth birthday.

In its second year, the report includes a ranking of 175 countries where childhood is most and least threatened. Singapore and Slovenia both rank first, with Norway, Sweden and Finland rounding out the top five. Eight of the bottom 10 countries are in West and Central Africa, with Niger ranked last for the second year running.

The report also found that:

Save the Children is calling on governments around the world to ensure that no child dies from preventable or treatable causes or is subjected to extreme violence; is robbed of a future as a result of malnutrition, early or forced marriage, early pregnancy, or forced labour; and that they have access to a quality education.