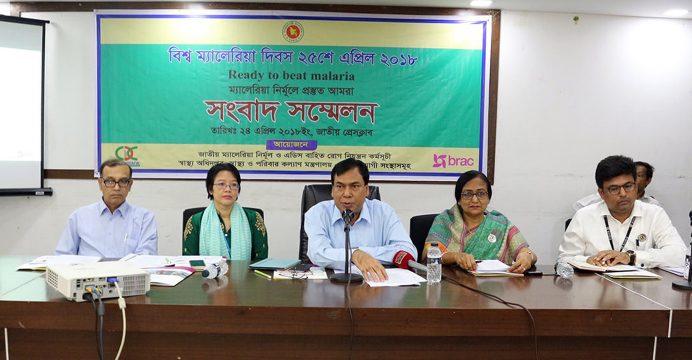 Three Hill Tract districts Bangladesh- Bandarban, Rangamati and Khagrachhari, are at considerable risk of malaria despite much has been achieved in checking the menace of the mosquito-borne disease. According to the National Malaria Elimination Programme (NECP), currently 93 per cent of the country’s 29 thousand and 247 malaria patients are from these three districts. The major reasons for these districts to have most malaria patients are their hilly frontiers, profuse rain, large forest area, inadequacies in healthcare system and problems faced while reaching treatment and other healthcare services.

Experts revealed this information at a press conference today on Tuesday (24 April 2018) organized at the National Press Club in the capital. The government National Malaria Elimination Programme and BRAC organized the event on the occasion of World Malaria Day 2018 observed on 25 April.

The press conference was arranged to disseminate information on the future activities required to eliminate malaria, challenges in risk mitigation and recommendations as well as public awareness messages.

It also mentioned that malarial deaths have much reduced lately, thanks to the collaborative efforts and effective measures by the government and non-governmental actors. While in 2014, 45 patients succumbed to the infection, in 2015 the number fell to only 9 (nine). However, 2016 saw a little rise in the number of deaths at 17, to drop again in 2017 to 13.

Professor Dr Abul Kalam Azad said, “Our goal is to eliminate malaria completely from Bangladesh by 2030. To achieve this goal we are working to prevent the disease from occurring in eight among the 13 vulnerable districts, while make sure that 51 districts are entirely free from malaria.”

Prof.(Dr) Sanya Tahmina said, “We have already produced a guideline for the travellers to the hilly regions that will help reduce their risk to contract malaria.” The government has also undertaken an initiative to distribute 333 thousand mosquito nets to the hilly regions and among the Rohingya people who have taken refuge in Cox’s Bazar after being forcibly evicted from Myanmar, she further said.

The keynote presentation also highlighted some of the major challenges for malaria elimination: Shortage of physicians and healthcare professionals in the remote areas limiting the capacity for treatment and healthcare service delivery, people’s increased mobility, increased risk of malarial infection in the border areas and climate change impacts.

To observe World Malaria Day 2018 a parade will be organised tomorrow on Wednesday, starting from Zero Point in the capital to end at CIRDAP. A discussion session will follow at 11am at the CIRDAP auditorium. Health and family welfare minister and lawmaker Md Nasim will be present at the discussion as the chief guest.

The theme of World Malaria Day 2018 is “Ready to beat malaria”.