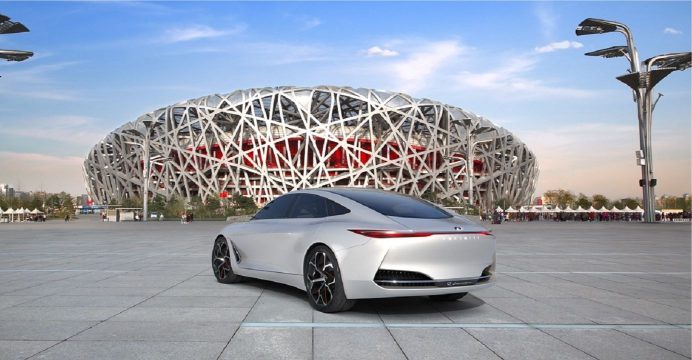 Highlighting the importance of the China automotive market, INFINITI Motor Company, Ltd. announced today it will build five new vehicles in China in the next five years, beginning with the all-new QX50 SUV. The announcement comes ahead of the Beijing International Motor Show.

In Beijing, INFINITI will unveil its all-new INFINITI QX50 midsize luxury crossover for the first time in Asia. Local production of the QX50 will begin ramping up shortly at the company’s manufacturing facility in Dalian, China. The QX50 midsize luxury crossovers built in China will be sold exclusively to the China market and will be available for purchase later this year.

In addition to the new QX50, the stylish and innovative INFINITI Q Inspiration concept car will also make its Asia debut.

Representing the next step in INFINITI design and electrification, the Q Inspiration features clear and concise lines with dynamic and confident proportions. It is the first manifestation of INFINITI’s new form language for an era of electrified powertrains.

INFINITI is also reconfirming the company’s commitment to electrification. For Chinese car-buyers, this translates into vehicles with increased performance and fuel economy with reduced emissions.

INFINITI operates in China via a partnership with Dongfeng Motor Company Ltd. (DFL), China’s largest automotive joint venture. In 2017, INFINITI sold a record 48,408 vehicles in China, a 16 percent increase from the prior year.