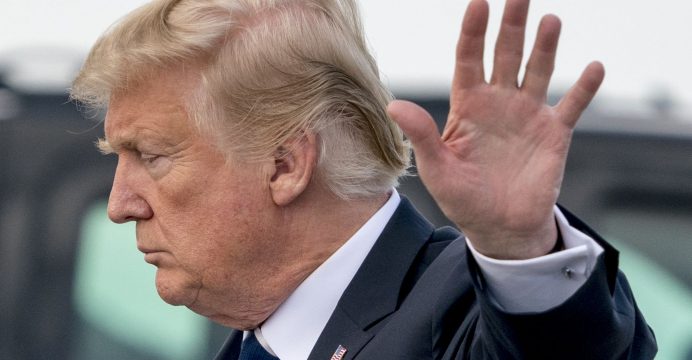 Is Donald Trump really unaware of the collusion between Damascus and ISIS?

Debunking the myth that Assad and allies are against ISIS

US President Donald Trump said this on Tuesday 3rd April 2018: “I want to get out, I want to bring our troops back home,” Trump told reporters, claiming the United States has “almost completed” the task of defeating ISIS as part of the civil war in Syria”.

John Kerry, the former US Secretary of State, said in November 2015 that ISIS “was created by Assad” and by former Iraqi Prime Minister Nouri al-Maliki, both of whom released al Qaeda prisoners in their respective countries

Forget the conspiracy theory that either Mossad or the CIA are funding and advising ISIS in order to “smear” Muslims. In fact, ISIS has been a joint Syrian/Iranian project since 2013 to tarnish the Syrian revolution, to protect the Assad regime and portray Bashar al Assad as a fighter of terrorism.

Iran and Syria have had a history of working with al Qaeda and its off-shoot ISIS.

The Wall Street Journal reported in January 2017 that officials from the U.S. and Europe said the Assad regime, despite pronouncements that it is fighting the extremist group, is directly supporting ISIS through the purchase of oil from ISIS.

Officials said ISIS was seeking new sources of revenue as its territory shrinks; the group used to collect transit tolls and wage taxes in areas within its control. Sales to the Assad regime were reportedly detected by monitoring oil transport routes. Trucks once routed to Turkey and Iraq are now reportedly headed into Assad’s territory from ISIS’s stronghold near Palmyra.

“The group took control of a number of oil fields and natural gas facilities in 2014, and made up to $1 million a day selling the fuel to the Syrian regime”. In January 2014 a report in the Daily Telegraph by Ruth Sherlock drew attention to the oil deals between ISIS and the Assad regime.

“According to media reports in June 2014 the Assad regime had refrained from attacking ISIS bases. A Syrian government adviser told the New York Times’ Anne Barnard this was indeed a deliberate policy designed to “tar” the broader opposition and “frame [the] choice” as either Assad or the extremists.

In a further twist that implicates the Assad regime in collusion with ISIS, on 6th February 2015, the US Embassy in Syria accused the regime of supporting ISIS advance on Syria’s largest city, Aleppo. The Embassy tweeted:

Reports indicate that the regime is making air-strikes in support of #ISIL‘s advance on #Aleppo, aiding extremists against Syrian population

In a string of tweets, the U.S. embassy condemned Assad’s actions, saying he “will never be an effective counterterrorism partner.” Embassy operations have been suspended since 2012, but the Twitter account is still active.”

A question that puzzled Western observers what would Iran’s motivation be to support Sunni jihadist organizations like ISIS? In Syria, ISIS has forced the West to choose between the regime of Bashar al-Assad or a terrorist outfit. Given that choice, it was assumed that the West would back Assad, as did the Russians and the Chinese.

Cynically Iran is exploiting the Western fear of terrorism to make common cause with the West against ISIS.

It is a known fact that the Iranian and Syrian regimes have been manipulating al-Qaeda to their own advantage. During the occupation of Iraq, particularly the period 2003 – 2010, Syria had been actively facilitating the entry of al-Qaeda jihadists to destabilize Iraq and kill American soldiers and Iraqis. Later, at the behest of Iran and Syria, al-Qaeda carried out operations in Saudi Arabia, Egypt, Jordan and the USA.

The US 9/11 Commission Report, had already established that Iran even “facilitated the transit of al-Qaeda members into and out of Afghanistan before 9/11, including future hijackers.”

According to the report, Iran wished to conceal any past evidence of its cooperation with Sunni terrorists’ association with al-Qaeda,” but these connections continued. Iran actually has a lot to gain from keeping ISIS alive. As long as the group survives, Iran can claim that their allies in Syria and Iraq are preventing a jihadist takeover – an argument that raises Tehran’s prestige and ensures it a degree of international support for their allies in both countries. This argument has so far worked.

At ISIS’s headquarters in rural western Aleppo in March 2014 opposition forces discovered official documents, passports and SIM cards issued by the Iranian authorities to fighters from Chechnya and Kazakhstan. Doesn’t this suggest some kind of connection between ISIS leaders and Iranian intelligence, of which rank and file of ISIS are likely ignorant?

ISIS suddenly emerged in Syria, at a time when the collapse of Assad’s regime seemed imminent. The emergence of ISIS saved the Syrian regime by threatening the world that an alternative terrorist regime would replace Assad’s.

ISIS has been criticized for its attacks on civilians and rival opposition groups. It has rarely targeted the Assad’s regime and not a single barrel bomb has been dropped by the regime on ISIS.

The Guardian reported in September 2014 that “the Syrian government and its close allies in Moscow and Tehran warned Barack Obama that an offensive against Islamic State (Isis) within Syria would violate international law”. The implication is obvious: leave ISIS alone.

DONALD TRUMP UNAWARE OF THE ISIS-ASSAD CONNECTION AND COLLUSION

“The Syrian regime’s collusion with the terrorists of the so-called Islamic State goes back a decade”.

“In his first interview after winning the presidency, Donald Trump hinted that he will shift policy in the Syria conflict from one of support for the moderate opposition to collaboration with the regime of President Bashar al-Assad. “Syria is fighting ISIS, and you have to get rid of ISIS,” Trump said. As for the rebels that the U.S. has backed fitfully for the past three years, he said: “We have no idea who these people are.”

President Assad has always claimed that al-Qaeda terrorists had led the national uprising in 2011 to justify the mass killing of peaceful demonstrators and protesters. Assad claimed to “be the victim of extremism, he, in fact, played the principal enabling role in its rise in the region, a two-year investigation by The Daily Beast shows”.

Even John Kerry, the former secretary of state, said in November 2015 that ISIS “was created by Assad” and by former Iraqi Prime Minister Nouri al-Maliki, both of whom released al Qaeda prisoners in their respective countries. Assad’s aim was to tell the world, “It’s me or the terrorists.”

The Daily Beast investigations reveal how the regime staged bombings of its own security facilities in 2011 and 2012 to foster the impression that al Qaeda had an armed presence in Syria long before it did.

The Syrian intelligence received orders to stand by when al Qaeda fighters crossed from Iraq into Syria in 2012 and how it had penetrated the leadership of extremist jihadist groups and at critical moments can influence their operations.

Assad’s relations with the jihadists traces back to the seminal role his regime played in helping foment the Iraqi insurgency following the U.S. invasion in 2003.

“A trove of al Qaeda personnel records uncovered by U.S. forces in 2007 in the northern Iraqi town of Sinjar showed that more than 600 fighters from Saudi Arabia, Libya, and other Muslim countries had crossed into Iraq from Syria between August 2006 and August 2007. “It is almost inconceivable that Syrian intelligence has not tried to penetrate these networks,” a report by the West Point Combating Terrorism Centre stated in 2008”.

A WikiLeaks cable showed. “In principle, we don’t attack or kill them immediately,” Gen. Ali Mamluk, now Assad’s top intelligence advisor, said of al Qaeda operatives. “Instead, we embed ourselves in them, and only at the opportune moment do we move.” Mamluk offered cooperation in arresting terrorists in exchange if the U.S. would ease economic and travel sanctions”.

“The Syrian government made an enormous mistake in 2003,” said Massoud Barzani, the president of the Kurdistan Regional Government in a recent interview with The Daily Beast at his military headquarters in Suheil, in the far north of Iraq’s Kurdistan region, near the Syrian and Turkish borders. “They opened the door to terrorists in order to put pressure on the American troops in Iraq so they wouldn’t even think of war (against Syria).”

The regime not only had penetrated the networks but often ran them. That was by design. As Gen. Ali Mamluk told U.S. officials in 2010, the regime as a practice would “embed ourselves” among Islamic extremists in order to turn on them later. Mamluk is currently Assad’s senior intelligence adviser.

THE FAKE LIBERATION OF PALMYRA

The pre-orchestrated liberation of Palmyra (Tadmur in Arabic) is a good example of Assad-ISIS collaboration. I wrote about this in the WHAT and the WHY News website some 2 years ago (31st March 2016)

In 2015 according to media reports “Assad regime forces abandoned the city of Palmyra and allowed ISIS to take it over unopposed.

Now some Arab media are calling the liberation of Palmyra a choreographed theatrical play aimed at Western audiences with the simple message – the regime is standing up to ISIS. Gullible Western Politicians had fallen victim to Assad’s flagrant deception. Even the ex-London mayor Boris Johnson wrote an article in the Daily Telegraph praising both Assad and Putin.

Colonel Ahmad Hamady of the FSA explained that “in May 2015 the Syrian army withdrew from Palmyra without a fight opening the way for ISIS to occupy the ancient city. Assad wanted to show the world that ISIS poses a great threat and only his regime can defeat it.

The tragedy of Palmyra: First look inside one of world’s most magical ancient ruins – now utterly destroyed by ISIS.

A pro-regime website (Syrian Perspective) quoted General Ali Abdullah Ayyoob, Chief of the Syrian General Staff as saying last Sunday: “the rats (ISIS men) inside were finally given the go-ahead to withdraw to Al-Sukhna, Al-Raqqa, and Deir Ezzor. This morning at 5:00 a.m., the SAA had confirmation from sources inside the city that the piece-meal escape was taking place. The Syrian high command ordered troops to stand down until the last rodent had left”.

Latest news according to media reports says that Assad and his allies are fighting to control Eastern Ghouta but a few Kilometers southwest, ISIS maintains a tight grip over parts of southern Damascus’ suburbs. Assad has not made any attempt to fight ISIS in the areas around Damascus, leaving ISIS to control the lives of hundreds of thousands of civilians.